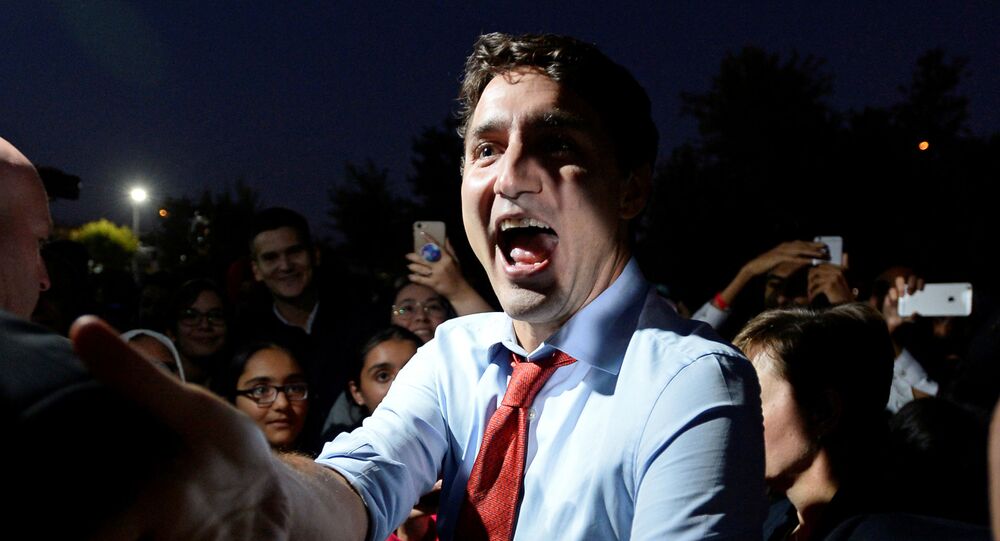 ‘Did He Have Any Other Hobbies?’ Justin Trudeau’s Newly-Released Blackface Video Fuels Online Debate

The video appears to be a longer version of a short fuzzy clip obtained by Canadian media earlier this month. The Liberal Party leader has found himself at the centre of a major controversy after two other instances of him wearing make-up to darken his skin – which he admitted was racist – made headlines a month before the federal election.

Trudeau is filmed dressed up as a black man in an Afro wig; it appears as though his arms and legs are also covered in black paint, with his pants shredded from the knees down to the feet.

The video also includes scenes from a white water rafting event; the young Trudeau, who’s sticking his tongue at the camera, appears to be the only member of the group in blackface.

The footage was first released on Saturday by the Toronto Star; the newspaper then blocked the video for several hours for unknown reasons, according to The Post Millennial news site, but it is currently available.

Coupled with two other instances of Justin Trudeau wearing black and brownface, the video left a number of people wondering why the prime minister has such a penchant for painting his skin dark.

I honestly don't see anything inherently wrong with painting your body black... but the fact this guy did it so many times is... suspicious. Especially considering how progressive he tries so hard to portray himself as.

Almost as if he's completely filled to the brim w/ BS.

Again?? How many times does he wants to be black?? I thought the lefties hate this sort of thing. Hope they hunt him down in a pack!

Good lord did he have any other hobbies?

And while some suggested there was no need to crucify Trudeau, others viewed it as an example of double standards from the left.

The usually shouty PC outrage brigade that screams for high profile people with historical blackface photos to be fired (until they’re fired), is eerily silent on Justin Trudeau.
It’s like they only apply their standards to people they don’t agree with.pic.twitter.com/IUgwXkpIql

I’m curious, would you be making the same statement if it was Trump?

If pics and film of Trump would have surfaced with him in #blackface it would be all over the news about how racist he is (even more than they already do that). Since it's Justin Trudeau everyone's like, this is fine. Ther's no problem.

The newly-released shots seemingly are an extended, higher-quality version of a grainy clip that was first published by Canadian news outlet Global News on 19 September.

Global News said it had obtained the video from a source within the Conservative Party of Canada – Trudeau’s main rivals in the October federal election, who are polling slightly behind his Liberal Party.

Trudeau, 47, confirmed it was him in the video and said it was shot during a “costume day” for river guides on the white-water rafting operation in the summer between 1992 and 1994 – which would make him between 21 and 23 years old at the time.

The prime minister, who has built his career as a champion of diversity and political correctness, has seen his re-election campaign plunge intro controversy after photos surfaced of him wearing brownface make-up at a 2001 Arabian Nights-themed event in the private school where he was teaching, and performing at a high school talent show to portray Jamaican-American singer Harry Belafonte with his face blackened.

Blackface was often used for entertainment in the past; while black people were not allowed to play in theaters, white performers would paint their faces black to portray black characters. Dressing in blackface or brownface is often considered to be offensive to respective ethnic communities as an act perpetuating racial stereotypes.

Trudeau has apologised for wearing the darkish colours, saying that he didn’t think it was racist at the time and “should have known better.”

It appears that his popularity has nevertheless sunk over the blackface episodes, with the Tories standing at 37 percent and Liberals at 32 percent in the latest polls.