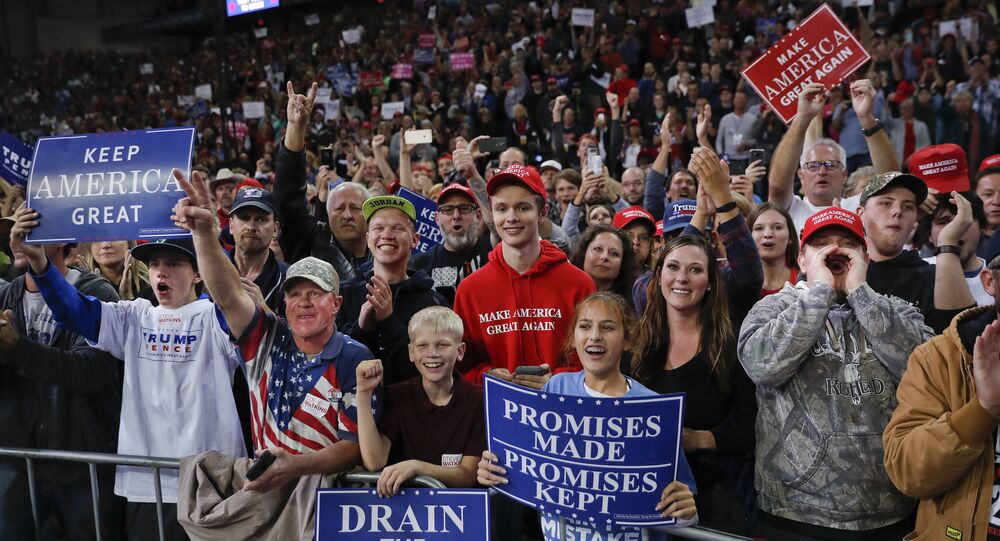 President Trump’s 2020 reelection campaign has kicked off an “Official Impeachment Defence Task Force” to “fight back” against the Democrats’ impeachment inquiry, an email sent out to supporters says.

“The Democrats know they have no chance of winning in 2020, so now they are crying, ‘Impeachment!’” the email notes. “This task force will be made up of only President Trump’s most LOYAL supporters, the ones committed to fighting for him, re-electing him, and taking back the House,” it adds.

Accusing the Democrats of trying to ‘silence and intimidating’ the president’s supporters, and of seeking to “take YOUR VOTE away”, the email urges Trump supporters to donate as little as $5 dollars, or “your best amount” to “join” the task force, and promises that the donations will be “double matched”, without clarifying by whom.

The ‘task force’ was kicked off as the Democratic-controlled House of Representatives announced Tuesday that it would move forward with an impeachment inquiry over Trump’s telephone call with Ukrainian President Volodymyr Zelensky in which Trump allegedly asked Zelensky several times to reopen a probe into Hunter Biden, son of former Vice President Joe Biden, who was being investigated for corruption during his work on the board of directors of Burisma, an energy firm operating in Ukraine.

Viktor Shokin, a Ukrainian prosecutor investigating Burisma, was sacked in 2016, with the Trump administration alleging that Vice President Biden may have pressured then-Ukrainian President Petro Poroshenko to sack Shokin, on pain of withholding a $1 billion loan to Ukraine. The Biden campaign has denied the claims, and accused Trump of violating his oath of office by trying to “get dirt on” his potential 2020 opponent.

The Democrats, for their part, accuse Trump of ordering the freeze of some $400 million in military assistance to Ukraine in the days before the Zelensky call, with the White House denying the claims.

Trump has promised to release the “complete, fully declassified and unredacted transcript” of the Zelensky call, and called the impeachment inquiry a case of “Witch Hunt garbage.” Later, Trump said that Ukraine had given Washington permission to release the transcript.

Online, the Trump campaign’s ‘Official Impeachment Defence Task Force’ was met with a combination of bewilderment and sarcasm, with many users accusing the president of acting like a ‘grifter’, comparing the pledge drive to a late night television commercial, or asking about how long it would take for donors to be able to be able to buy an official “impeachment defence task force bomber jacket” or “commemorative koozie”.

😂 "... Official Impeachment Defense Task Force". 😂 I wonder if it has its own logo?

Send $29.95!
And, if you act now, we will throw in this picture, suitable for framing, and autographed by all the law abiding Trumps! pic.twitter.com/1algKoEsEJ

Surprised he didn’t call it the Impeachment Defense Militia.

Because a real billionaire needs my $5.

Does membership include a decoder ring?

i give it like 8 hrs until you can buy an impeachment defense task force bomber jacket/flight suit/commemorative koozie https://t.co/PoBOY8yL0k

Jokes or not, other users said they planned to contribute, at least for a chance to opt in for one of those commemorative koozies.

Same. Doubling it too

Better to raise money from supporters than the taxpayers.

I'm a lib and I'd get one of those koozies