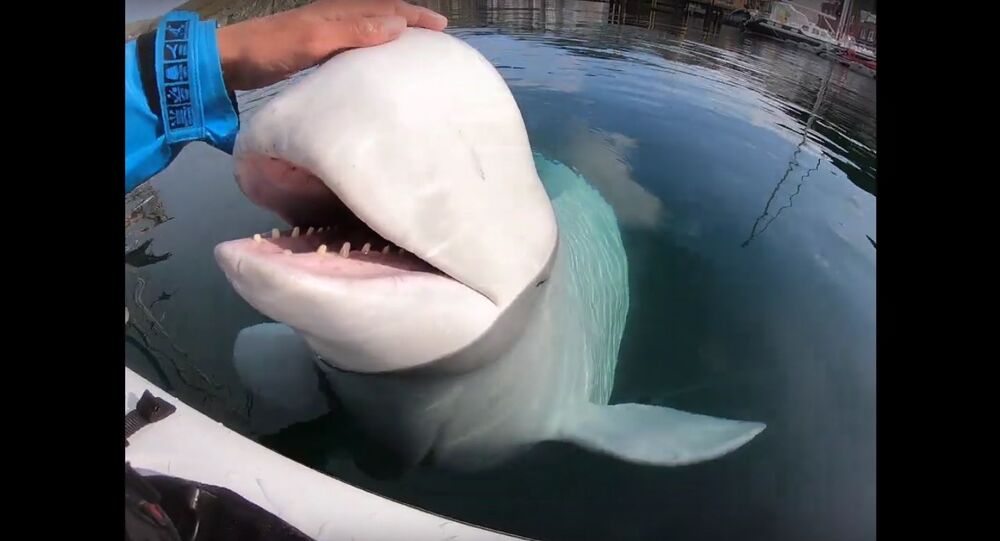 The exuberantly friendly celebrity whale who has been entertaining Norwegians with his tricks for several months, was initially accused of being a Russian spy and was even named “Whaledimir”, hinting at Russian president Vladimir Putin and his KGB past.

Hvaldimir, the affable beluga whale rumoured to be a runaway therapy animal, has once again who won the hearts of Norwegians and stunned the public with his stunts.

This time, Hvaldimir knocked a GoPro camera from the hands of a curious kayaker, only to return it after toying with it under water and capturing some shots of Hammerfest Bay.

Joachim Larssen was nearing the end of his four-month kayak journey from Oslo in the south to North Cape, when he saw a white shadow underneath.

“I was told [Hvaldimir] had been spotted the area, but had also heard that he had been away for a while”, Larssen told the local newspaper Altaposten, describing the animal as “cuddly and playful”.

Hvaldimir soon showed a keen interested in Joachim's camera and decided to take a closer look. He grabbed it and dropped it into the water, before politely picking it up again.

“I thought I'd have to dive a bit, I'm a diver, you know, so it wouldn't have been a problem to get to the bottom. But it would be cold, I thought,” Larssen said.

The encounter with the whale subsequently landed on Larssen's YouTube channel, only to be picked up by the Norwegian Institute of Marine Research.

“It's not problematic for him to have contact with people,” biologist and veterinarian Kathrine Ryeng assured, describing tourists as Hvaldimir's “flock”.

Earlier this year, the unmistakably tame white whale appeared in the waters of Norway wearing a Russian-made harness, throwing the country into a tizzy, inviting suspicions of cetacean spy activity and the attention of the Norwegian Police Security Service (PST). Researchers from the very same Institute of Marine Research suggested that the whale could have escaped form the Russian Navy, which, they claimed, had a long tradition of experimenting on sea animals, which Russia strenuously denies.

Reflecting the spy scare and the alleged “Russian connection”, the Norwegian press dubbed the playful animal “Hvaldimir”, a portmanteau word for “whale” and the Russian name Vladimir. Later, the abundance of tricks up Hvaldimir's sleeve led many to believe he had a more peaceful profession and was a friendly therapy animal.