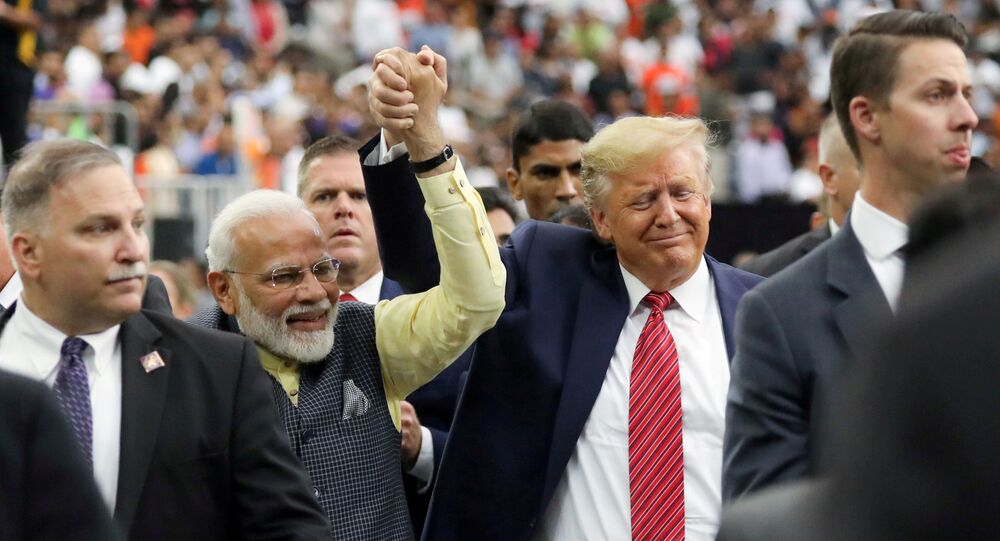 'Get a Room': Twitter Goes Ballistic Over Trump & Modi Bonding in Houston

At the rally, the two leaders showered each other with praise, with Modi describing Trump as a true “expert in the art of the deal”.

The “Howdy, Modi!” rally that was held on 22 September in Houston, Texas, and was attended by both US President Donald Trump and Indian Prime Minister Narendra Modi, sent ripples across the social media space due to the apparent bonding between the two heads of state.

During the event, which Trump described as “profoundly historic”, the US president hailed the India-US relationship and the Indian-American community, while Modi stating that he was "impatient to take the country to new heights" and that "today the buzz word in India is development."

The two world leaders showered each other with praise, with Modi saying that he is “learning quite a lot from Trump” whom he described as “an expert in the art of the deal”.

Narendra Modi, Indian Prime Minister: "President Trump calls me a tough negotiator. However, he himself is quite an expert in the art of the deal. And I am learning quite a lot from him." pic.twitter.com/TeUpCiXDsG

​“Ladies and gentlemen, I present to you my friend, a friend of India, a great American president, Mr. Donald Trump!” Modi declared, with him and Trump then shaking hands and hugging each other.

"Ladies and gentlemen, I present to you my friend, a friend of India, a great American president, Mr. Donald Trump!"

​As the footage of these scenes hit the social media space, many netizens appeared less than thrilled by Modi’s rhetoric.

One nut bag introduces another.

Modi is a gigantic tool. A religious nationalist authoritarian like El Naranja Gigante.

Some also speculated that the Indian prime minister was using flattery to get what he wants from Trump.

They all know that the way to get to the fool is to flatter him. He is so transparent

Modi has got it totally figured out. A true politician. 😂

The Prime Minister has learned the game. Flatter Orange Blossom, and then pick his pocket. pic.twitter.com/vFYHgRt0Yh