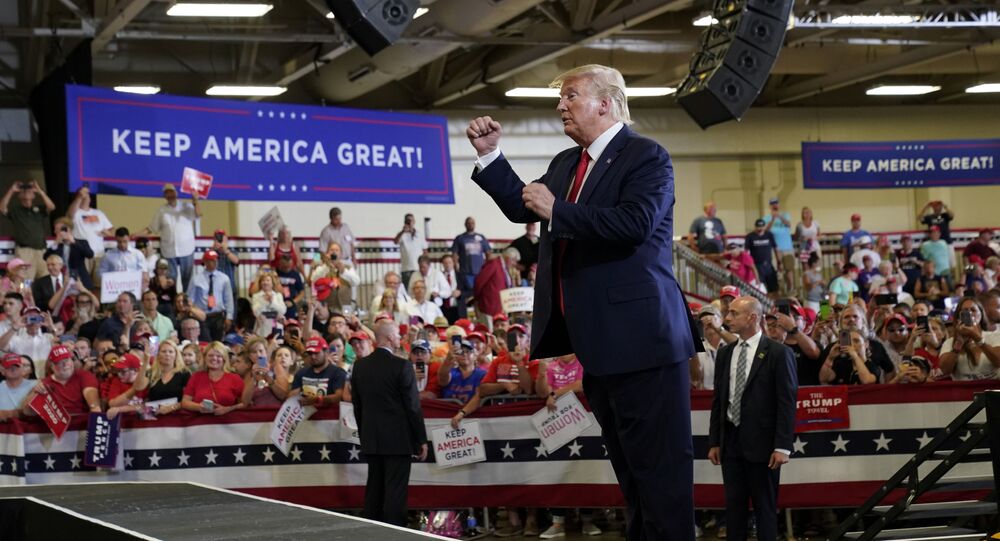 The picture, which was circulated online, was not considered a patriotic demonstration, but rather a political pro-MAGA endorsement, prohibited by North Stanly High School rules.

Cheerleaders have been put on probation after posing with a Trump 2020 banner during a football game last month. The North Carolina High School Athletic Association (NCHSAA) made the decision after the photo of the cheerleaders at North Stanly High School in New London, North Carolina, started making rounds on social media, with the NCHSAA stating that the probation is more likely a warning than a punishment, as it “highlights the NCHSAA’s philosophy of cheerleading as well as Stanly County Schools' local district policy on political endorsements by individuals representing the school”.

STANLY COUNTY, N.C. The North Stanly High School cheerleading team is on probation for taking part in a political message at a football game by posing for photos with a "Trump 2020: Make America Great Again" flag in August. pic.twitter.com/ePHLip8o1k

The demonstration was viewed as a political endorsement, which is not allowed under the regulations of the Stanly County Board of Education, both on campus and at school, with the policy, as it said on Monday, not ruling out speaking your mind freely.

Despite the political advertisement, the school district and the high school have confirmed that they see nothing wrong in allowing the squad to continue with their cheerleading activities. However, many weighed in on the debate, arguing that the probation itself is a violation of freedom of speech.

In support of the cheerleaders, an event has been scheduled for Friday, according to a Facebook page, asking members of the community to take to the streets and back the students, whom it says have been “wrongly put on probation”.

“Please bring all your Trump and MAGA gear and let’s throw our support behind the North Stanly High School cheerleaders”, the event description has it.

The event is also being promoted and widely reposted on Twitter:

@NCHSAA where do you get off on trampling the First Amendment rights of the North Stanly High School Cheerleaders??? I bet if they were wearing something from one of the Democratic Socialists you Snowflakes wouldn’t have made a peep. SHAME!

“So supporting Donald Trump is now grounds for probation?” another tweeted, with a third  going still further:

"If they would've kneeled for the anthem and spit on the flag the school would've cheered them", he posted, with others sharing the stance:

No it wasn’t. It was cheerleaders holding up a sign supporting our President, at a red, white and blue school day. Get your facts straight, your not the New York Times.. lol

The school issued a statement arguing that the squad hadn’t been disciplined over the case, although it was formally a violation of school policies, as the focus was placed not on the students themselves, but politics.

Let me guess...if it was during @POTUS44 reign, they'd get scholarships! I predict they'll be back cheering in no time! @NCHSAA stop playing your DIRTY LEFTIST POLITICS!