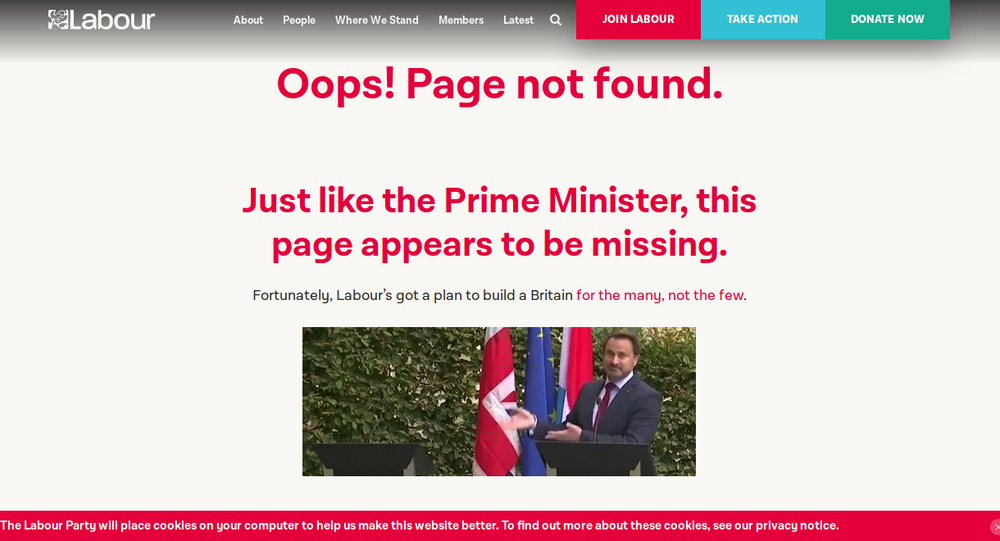 Visitors to the Labour party website can see the image firsthand by searching for a page no longer on the website, where they will see the error message.

"Just like the Prime Minister, this page appears to be missing. Fortunately, Labour’s got a plan to build a Britain for the many, not the few," the 404 page states with a link to the party's manifesto.

​One Twitter user said that the person that did the page "needs a raise", with another calling it a "sick, sick burn" against the Prime Minister.

Further headaches for the British Prime Minister surfaced on Wednesday when he was warned to "keep his nose out" of the UK Supreme Court's decision on whether or not he 'deceived' Queen Elizabeth II whilst asking her to suspend Parliament up to a Queen's speech on 14 October. Mr Johnson filed a written submission stating that UK judges had "no jurisdiction" over his decision to prorogue parliament, adding that judges risked "entering the political arena" as the hearing progress, with Labour supporters accusing him of "finger-wagging" interference, according to the Independent on Wednesday.

Mr Johnson has vowed to have the UK leave the European with or without a deal, but faces stiff opposition from Labour's coalition with the Liberal Democrats, Greens, Scottish National Party and others, who forced the PM to ask for an extension should Johnson fail to agree on a deal with Brussels during a crucial EU summit 17-18 October. Commons also twice voted down PM Johnson's request for snap elections, stating that they wanted to first rule out a no-deal scenario before agreeing to a general election.