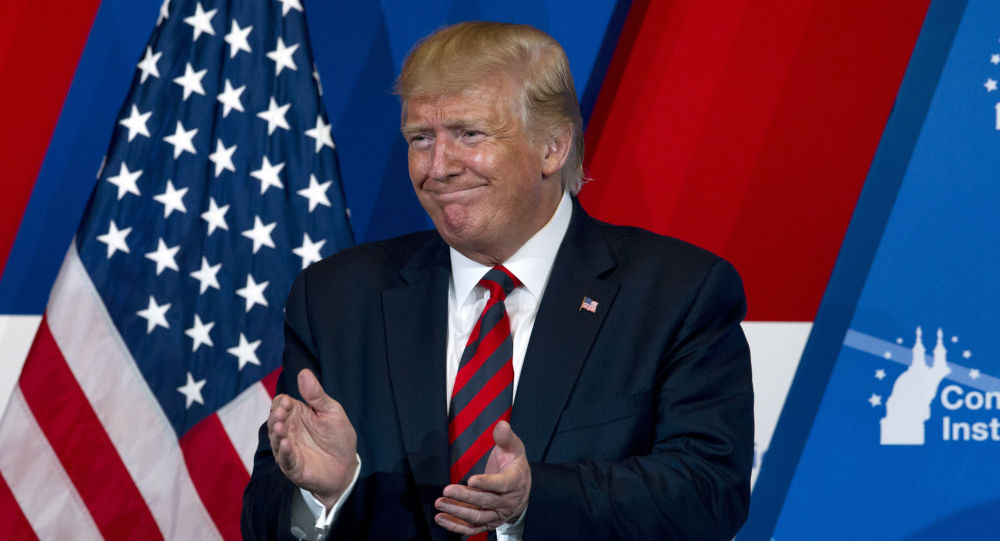 As the third debate between presidential candidates from the Democratic Party was unfolding on Thursday night in Houston, Donald Trump made certain comments about his potential rivals, while later also posting a GIF with Joe Biden’s face spinning on a vinyl record.

The US president took to Facebook to post a bizarre GIF of Joe Biden’s face spinning around after being photoshopped onto a vinyl record, in an apparent reference to the Democratic candidate’s remarks about “record players” in Venezuela, which some found to be “the strangest” answer during the Democratic debate night on Thursday.

“Social workers help parents deal with how to raise their children. It’s not that they don’t want to help, they don’t know what to play the radio, make sure the television — excuse me, make sure you have the record player on at night, the — make sure that kids hear words, a kid coming from a very poor school — a very poor background will hear 4 million words fewer spoken by the time we get there”, Biden said when answering a question on the legacy of slavery in the country.

Many Facebook users believed that Trump’s post was a nice touch to Biden’s word salad, praising the president’s “epic” sense of humour.

For example, one user caught Trump’s reference by writing “Hold on... Let me go find a record player to play at night so my children can hear words”.

“What in the world was he talking about anyway? Play records for the children each night?” another asked.

“Must be Joe's new band.. Creepy Joe and the Democrats”, one suggested tongue-in-cheek.

“I’m gonna be Joe Biden for Halloween. No costume necessary, just ring the doorbell and say something stupid. Everyone will guess immediately I’m Joe Biden”, was another comment from an entertained user.

Nevertheless, some netizens did not enjoy the joke, calling it “immature” and saying that the US president was “less intelligent than most middle schoolers”.

Prior to the Democratic debate, Donald Trump fired some mocking shots at Dem presidential candidates when speaking at a House GOP retreat dinner in Baltimore. In particular, he expressed his surprise at the fact that Elizabeth Warren, whom he has nicknamed “Pocahontas”, “emerged from the ashes”, while Joe Biden “was falling asleep” and had “no idea what the hell he was doing or saying”.

Trump also said early on that he believed that it would be Senator Elizabeth Warren, former US Vice President Joe Biden, and Senator Bernie Sanders who would “take it to the end” in the Democratic primaries.