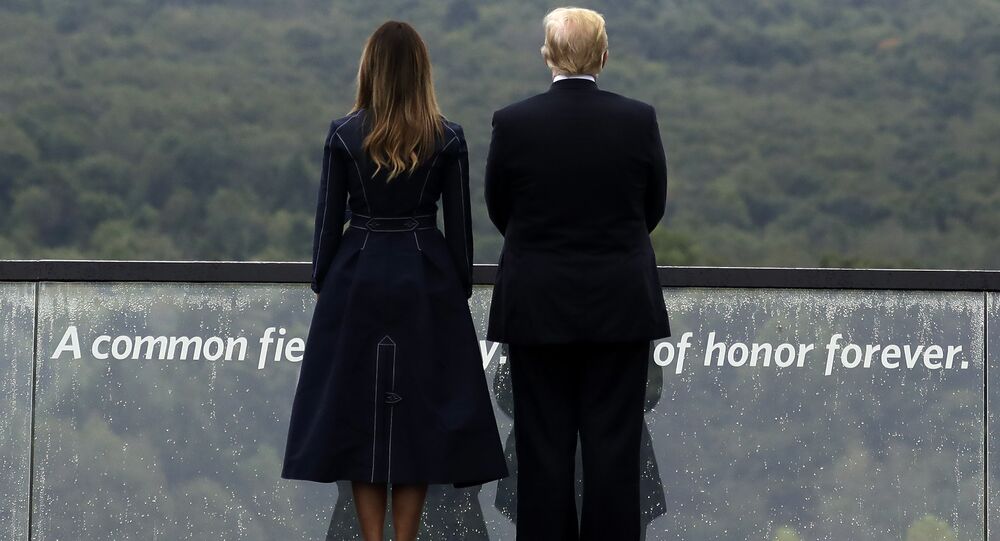 The US first lady has on several occasions come under fire for her wardrobe choices, including a row over the now-infamous “Don’t Really Care” jacket during her trip to the Texas border with Mexico amid the migrant child crisis. The recent uproar was triggered by the stitching on her outfit resembling, according to some, a skyscraper and plane.

White House spokeswoman Stephanie Grisham, who used to represent Melania Trump herself, has rebuffed criticism over the coat the FLOTUS wore in a photo taken while commemorating the 18th anniversary of the 9/11 terror attacks, posted on her and her husband’s Twitter accounts with the pledge “We will never forget”.

We will #NeverForget #September11 pic.twitter.com/UjjhV07Li4

​She dismissed claims that the trim and button tab on Mrs Trump’s coat was questionable, as some commenters suggested that it looked like a skyscraper and plane flying in its direction.

Once again, Melania Trump’s outfit has made national headlines due to heated debates online. Many suggested, jokingly or seriously, that this time the coat is not just a coat.

Is...is that a plane crashing into one of the twin towers in the back of Melania’s coat?!? pic.twitter.com/7hhBjooU4z

I’m sure I’m not the first one to spot this but who in the world thought it was a good idea for Melania to wear this coat in the 9/11 photo. It legit looks like an object is flying into a tower or the Washington Monument pic.twitter.com/w2qOpxP15G

Uhhh. Before we get into all the bullshit lies that 45 has spewed about 9/11, can we discuss the embroidery on Melania's coat? WTF?!!! #NeverForget pic.twitter.com/aH13PyHI1R

Melania never wears something by accident. She is deliberate. She wore a pussy-bow blouse after Trump's pussy-grab statement. She wore an "I don't really care" jacket when she went to see children in cages. On the anniversary of 9/11 she wears this embroidered coat? WTAF? pic.twitter.com/nSVHnpe8Wz

​However, her husband’s appearance was also mocked.

Baby Don Don! It took a while to notice that tacky insensitive coat that Melania was wearing because I was so distracted by your big giant ass! No over sized suit can mask that vile monstrosity. I guess you would say It’s the largest ass anyone in this country has ever seen.

​Others seemed to agree with Grisham, suggesting that the whole argument is preposterous.

The left is triggered by many things. They imagine a lot of it, too. Like Melania Trump's coat. https://t.co/vlGM6IOkT6

​Even those who described themselves as anti-Trump sided with the FLOTUS.

Sometimes a coat is just a coathttps://t.co/XIooyDOAzp

​In less than three years as the US first lady, Melania Trump has been mocked or criticised on numerous occasions for her clothing choices. Last year, US media ripped into her outfit selection when she donned a white pith helmet while sitting in a safari vehicle during her trip to Africa, being ridiculed for her perceived imitation of European explorers and conquerors. In the summer of 2018, media and social networks exploded with outrage after she wore a designer khaki jacket with a print on the back reading: "I really don't care, do u?" as she departed on a visit to a migrant child centre in Texas.