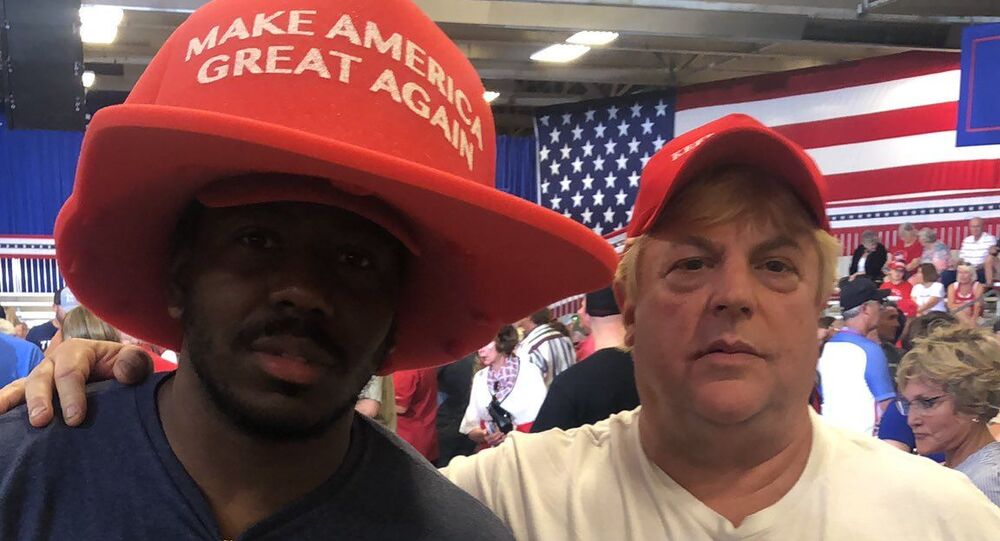 On Monday, Donald Trump held his 10th presidential campaign rally this year in the US state of North Carolina as part of his 2020 re-election bid, ahead of a special election in the 9th Congressional District slated for 10 September.

Donald Trump’s campaign rally in Fayetteville, North Carolina gathered no fewer than 5, 000 supporters inside the Expo Centre, with many outside the venue also cheering the US president.

One Trump supporter, Bryson Gray, was wearing a huge red hat with the slogan “Make America Great Again” written on it, and when he was approached by reporters, he explained his reasoning for the fashion choice - which he made despite opposition from his friends.

“I have a lot of friends who tell me that I shouldn’t support Donald Trump because I’m black….they also tell me I shouldn’t wear the #MAGA hat, so I bought the biggest MAGA hat”, Bryson Gray said to one of reporters prior to the rally in Fayetteville.

"I have a lot of friends who tell me that ... I shouldn't wear the #MAGA hat, so I bought the biggest MAGA hat," Bryson Gray says ahead of tonight’s rally in Fayetteville, North Carolina. pic.twitter.com/ojOG20BdHp

Gray explained that he had travelled from Greensboro to Fayetteville solely for the purpose of attending President Trump’s rally.

Although some netizens questioned Gray’s choice of apparel, some reactions to the hat were very positive, with social media users praising the Trump fan’s bravery, who is apparently now considered “badass”, according to one commenter.

I love this guy. Where do I get mine? This hat along with a shirt that says something like "climate change is a hoax" or "I ♥️ global warming" would make some people spontaneously combust.

Now THiS is a badass

🤣 Not only does he wear the MAGA hat but he wears an ENORMOUS MAGA hat.

Gray later posted some pictures from the North Carolina meeting on his Twitter account and thanked everyone for the support his hat enjoyed, arguing that he wears it “everywhere”.

Thanks everyone! That’s me though wtf lmao

Among other things, during the rally the US president particularly discussed the improvement of the American economy, arguing that "more than seven million Americans have been lifted off of food stamps, and nearly 600,000 Americans entered the labour force last month alone", with some sources, however, later arguing that the claims were unsubstantiated.

In September, the Bureau of Labour and Statistics announced that the unemployment rate among African-Americans had fallen to 5.5%, a record low.

It was also reported by Rasmussen that Donald Trump's approval rating among African-Americans had risen by 6% in the first week of August 2019 in comparison to August 2018, now standing at 32%.