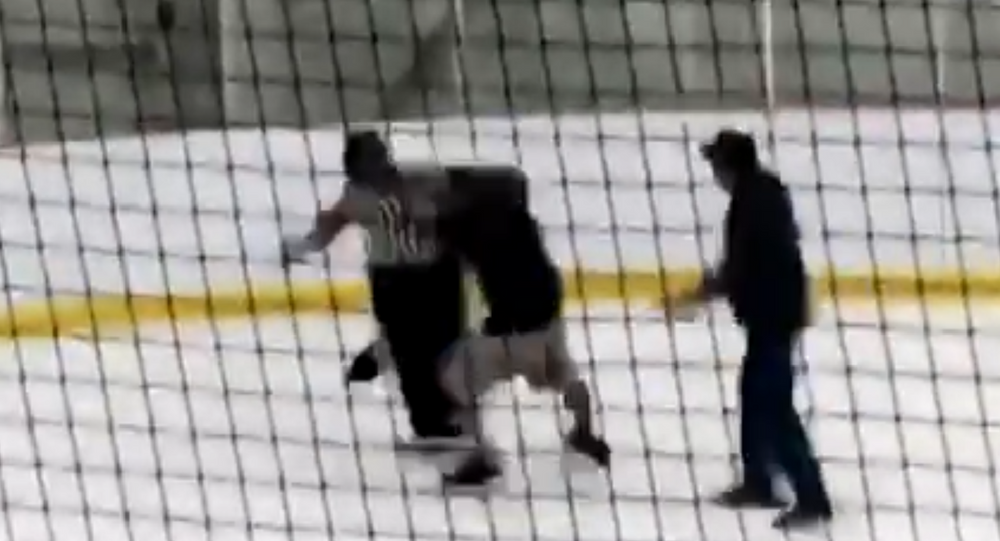 Newly released cellphone video footage shows the moment in which an altercation broke out between several men and a referee at a children’s hockey tournament Sunday night in the city of Lethbridge in the province of Alberta, Canada.

The 10-second clip was taken at the hockey rink at the Crossings Ice Center in Lethbridge during the Quest for the Cup 3-on-3 hockey tournament for kids aged between seven and 12.

​The footage shows a man falling onto the ice as he moves toward a referee. Moments later, another man approaches the referee and shoves the official onto the ice. The referee gets up and punches the man, causing him to lose his footing. Another man joins the brawl and falls onto the ice as well.

According to a Monday news release by the Lethbridge Police Service (LPS), the altercation started after a 10-year-old male player, who was arguing with the referee, struck the official twice with his hockey stick.

The referee then pushed the 10-year-old onto the ice. A group of adults including coaches and one of the player’s relatives, later identified as 55-year old Robert Farrel Creighton, entered the hockey rink. An unidentified coach was pushed over, and the referee was punched by Creighton and another unidentified 36-year-old man.

“The relative was subsequently arrested without incident, but the second male left the area and police are attempting to locate him. Assault charges are pending against him,” the news release reads.

The 10-year-old player was not injured in the altercation, and neither the referee nor the coach experienced life-threatening injuries.

Creighton, who was charged with one count of assault, is expected to appear in court October 9.

In a Sunday statement on Facebook, High Performance Hockey, the tournament’s organizer, wrote, “Actions like this have no place in our game. We are especially disappointed to see an act like this occur.”

Video: Elderly Commuter Beaten With Own Cane After Brawl Erupts on US Bus