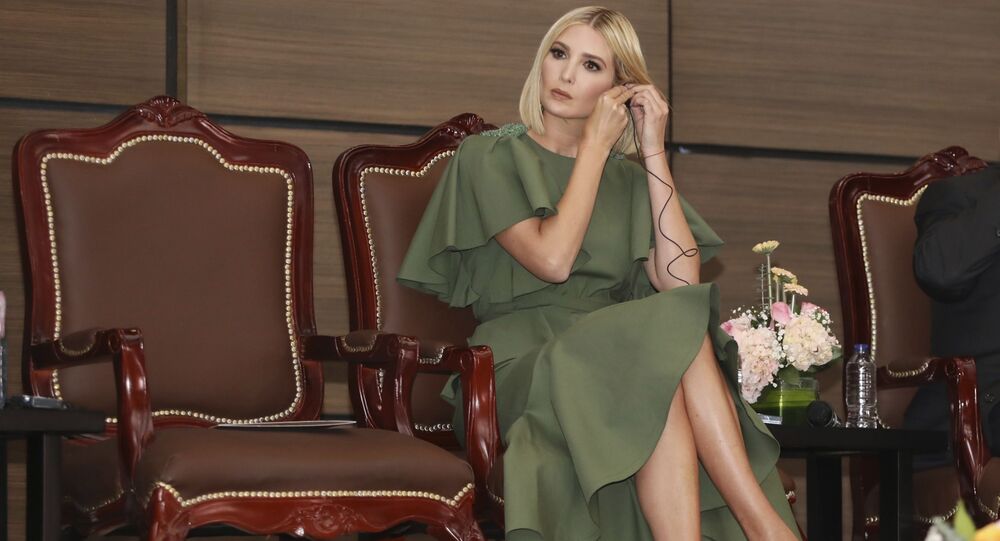 First daughter Ivanka Trump arrived in South America on Monday as part of the White House’s women empowerment project, but irrespective of her efforts, it was the top WH adviser’s dress that stole the show.

A gust of wind gave Ivanka Trump’s extravagant designer dress an unexpected makeover as she visited Colombia this week. The $1,650 green item designed by local designer Johanna Ortiz, per a W magazine report, flared up around Ivanka as she stood by the side of Colombia Vice President Marta Lucia Ramirez and the country’s defence minister, Guillermo Botero.

Naturally, fashion critics couldn’t help putting in their two cents, posting side-splitting collages with no less hilarious captions. One, for instance, glanced upon Ivanka as a huge lizard, whose “frills” shoot upwards in the event of danger:

Great minds think alike, and so do we! 😅

Ivanka's huge frills lie down until she is startled and then they flare up defensively, just like the lizard's!

… while another likened the “drums” on Ivanka’s dress, which is incidentally called exactly “Follow the Drums,” to a dog’s collar:

Why are Ivanka’s arms both wearing the cone of shame?? pic.twitter.com/SZlAICOO4o

“When danger approaches, the Ivanka will expand her arm frills to appear larger to potential predators,” one commenter said mockingly, while many others opted to post screenshots from famed cinema and theatrical productions that Ivanka reminded them of.

A Quarter Quell! How exciting! May the odd be ever in your favour. pic.twitter.com/c0ShqFEgnj

One user brought up the role-playing game Dungeons and Dragons, suggesting Ivanka looks like a Myconid, an intelligent humanoid fungi:

….another also engaged in what appeared to be a competition for which role best suits Ivanka in her quirky garment, claiming she was cast as Poison Ivy in the next Batman sequel:

Ivanka was just cast as Poison Ivy in the next Batman? https://t.co/7BCGuimbhd