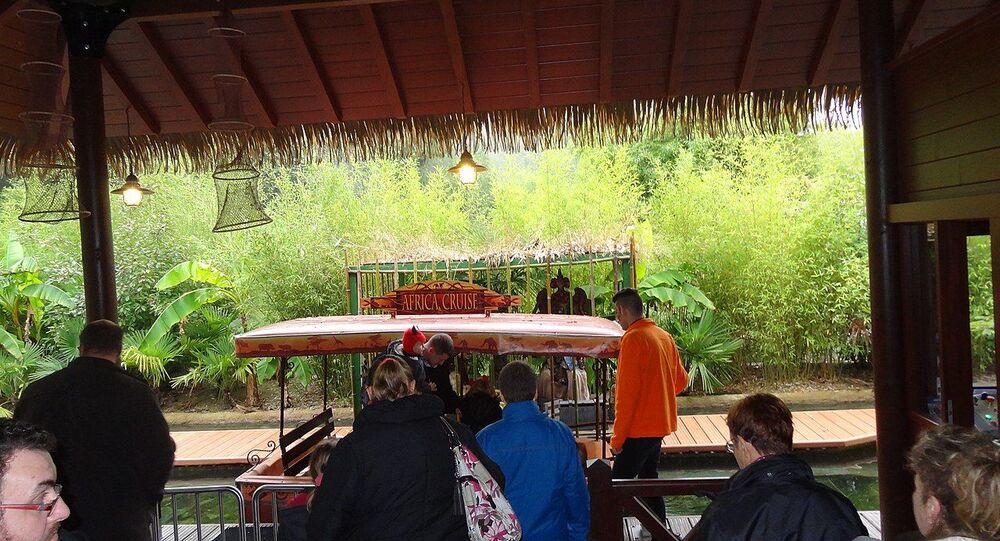 The French amusement park Nigloland, which has existed since 1987, recently came under a storm of criticism from the public, who believed that one of its attractions was intolerably “racist”.

The French theme park Nigloland has been forced to change one of its attractions, which features white and black men stuck in a tree, and apologise to the public after some visitors found the display to be “racist”, L'Est-éclair reported on 30 September.

The theme park, located in Dolancourt in north-eastern France, offers visitors a “safari-style” experience during an “African Cruise”, where guests are invited to take a boat ride while observing different attractions. One of the sights, which visitors found to be offensive to the black population, featured two men stuck in a tree while trying to escape a robotic rhino, with a figure of a white man depicted with a helmet and the black one wearing a fez while carrying a bunch of bananas in one hand.

As the display was also animated, many revellers found the audio effects inappropriate, as the white character was stating in French "stop talking Bounama, and help me climb onto this branch before my trousers start looking like a sieve!" while the black figure replied to him with an exaggerated African accent and called him “boss” several times.

A video of the scene posted by a user on Twitter on 27 August asked netizens in French whether they found the video “normal”.

Immediate reactions followed the post, with users resenting the scene and finding some “colonialist” sentiments in the display.

"Is this to make the slaver's sons laugh or what", one of the users demanded in French.

​"Shocking that it can still exist, boycott this park and its colonialist impulses of another age, and now it's coming out, better late than never", commented one of the observers in a Twitter reply.

"Basically they put a black in a tree holding bananas in his hand, a reference to primates if I'm not mistaken", another tweet reads.

However, some users later noted that France has become entangled in a permanent controversy over racial issues, as the attraction had existed for many years and had not bothered anyone before.

"Poor France, we are entering permanent controversy ... The attraction in question has existed for several years at @Nigloland and has not bothered in the past!" says one of the tweets when translated from French.

Nigloland offered an apology to its visitors by writing on Twitter on 29 August in French “we apologise to the people we were able to encounter with one of the scenes of the Africa Cruise”.

“We are listening to our customers and sensitive to the quality of our park, we change the scene in question this weekend. Thank you for your understanding", the tweet reads.

In a comment to France 24 Observer, the park’s management team later confirmed that the display was changed “as soon as possible”, arguing that bananas were removed from the hand of one of the figures, while the conversation between the characters had been cut as well. The management also announced that the full scene will be totally re-built during the winter season.

The “Africa Cruise” park ride has been operating since 2013 with more than four million guests visiting the attraction, with no complaints having been received before.