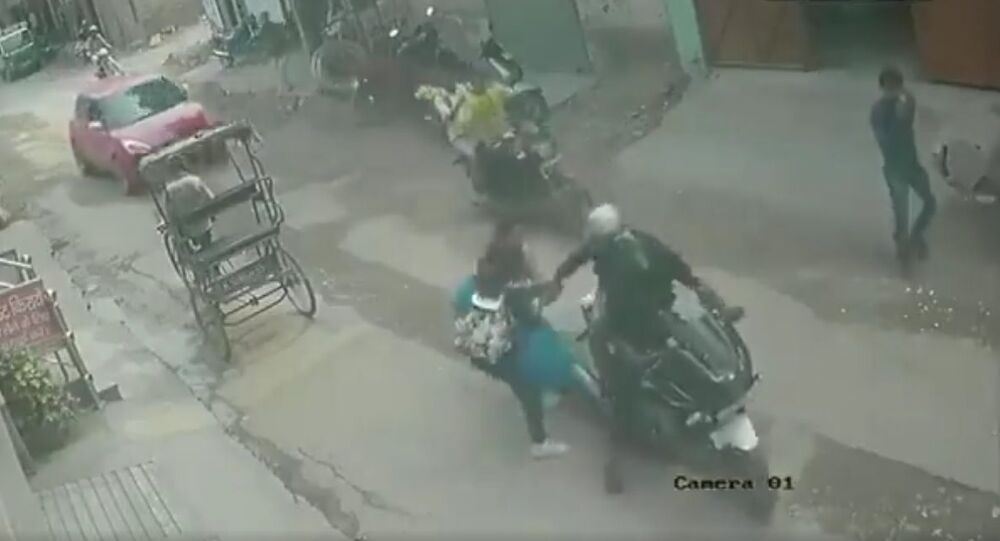 New Delhi (Sputnik): Netizens have hailed a woman and her young daughter in India’s capital city for daring to fight off bike-borne chain-snatchers when they attempted to rob one of them.

The video clip of the incident shows two women walking down a street in Nangloi Village of Delhi. When they were attempting to cross the road, two bike-borne men suddenly halted, and the passenger snatched the woman’s chain. Little did he think both would swing into action and pull him down off the bike. The woman and her daughter grabbed the chain snatcher by his arm and forced his accomplice’s bike to stop.

Just as the daughter and her mother started thrashing the thief, passersby joined them and gave a sound beating to the chain-snatcher who began pleading for mercy. His aide, however, managed to flee from the scene.
The clip of the incident spread like wildfire on social media and netizens hailed the duo for courageously fighting the chain-snatchers.
Some users likewise applauded the pedestrians who joined in to lend a helping hand to the women.

While one of the thieves was reportedly arrested on the spot, the other was later nabbed by the Delhi Police.

Police officials revealed that both the thieves are repeat offenders who have many ongoing criminal cases against them, reported news channel NDTV’s website.