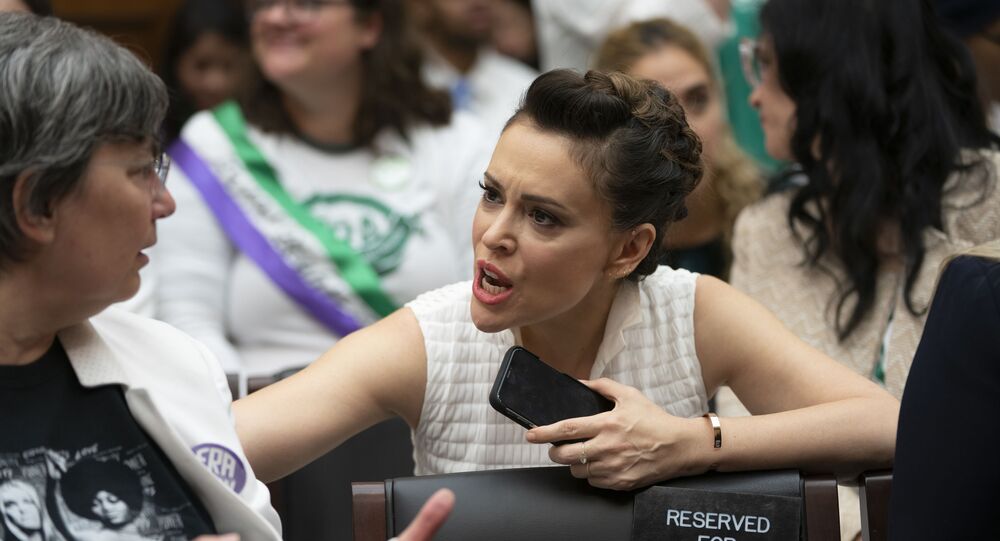 American actress and liberal activist Alyssa Milano has recently announced an initiative to create a fund that she believes will help Democrats win the 2020 presidential election in key swing states.

Senator for Texas Ted Cruz has bashed actress and anti-gun activist Alyssa Milano on Twitter after she asked whether anyone could “cite [in] which passage of the Bible God states it is a god-given right to own a gun?”

Can someone cite which passage of the Bible God states it is a god-given right to own a gun? This guy is unbelievable and is clearly owned by the gun lobby. #NoRA https://t.co/PxVV1RoV2Z

​Milano's initial tweet was addressed to Republican Texas State Representative Matt Schaefer, who argued that he was “NOT going to use the evil acts of a handful of people to diminish the God-given rights of my fellow Texans” and that “none of these so-called gun-control solutions will work to stop a person with evil intent”.

The comments by the representative from Texas were made in relation to a shooting rampage that occurred in Odessa, Texas on Sunday, 1 September, where a gunman killed seven and injured at least 22 before he was shot dead by police.

While the actress accused Schaefer of being “unbelievable and clearly owned by the gun lobby”, she got a long and detailed response from Senator Ted Cruz, who argued that Milano had an “excellent” question about the Bible and cited several passages from the book in order to illustrate that there are indeed some lines to prove his point.

“The right to self-defense is recognized repeatedly in the Bible”, the senator continued, citing Exodus 22:2, where it is stated that “If a thief is caught breaking in at night & is struck a fatal blow, the defender is not guilty of bloodshed”.

2/x The right to self-defense is recognized repeatedly in the Bible, eg Exodus 22:2: “If a thief is caught breaking in at night & is struck a fatal blow, the defender is not guilty of bloodshed.” (Note, though, verse 3 says it IS murder if during daylight (ie, not self-defense).

The Texas senator also noted that while all men are “endowed by their Creator with certain unalienable Rights, that among these are Life, Liberty and the pursuit of Happiness”, the Second Amendment provides that “the right of the people to keep and bear Arms, SHALL NOT be infringed”, which “wasn’t to protect people’s ability to hunt, or to shoot target practice, but to defend their lives, their homes & their families”.

4/x And, for that reason, the Second Amendment provides “the right of the people to keep and bear Arms, SHALL NOT be infringed.” It wasn’t to protect people’s ability to hunt, or to shoot target practice, but to defend their lives, their homes & their families.

​In a 10-tweet-reply, the politician also cited the story of Stephen Willeford, who risked his life while trying to stop the shooter during the Sutherland Spring church massacre in 2017 and referred to the disarmament of African-Americans as an attempt to strip them of their right to “self-defense from violence”.

6/x St. George Tucker, one of the most important scholars in early America, explained the reasons behind the Second Amendment as follows: “This may be considered as the true palladium of liberty. . . . The right of self defence is the first law of nature....”

8/x That’s also why, post Civil War, disarming Black Americans was a critical objective of the KKK, and was memorialized in countless Jim Crow laws—to strip African-Americans of their God-given right to self-defense from violence.

Cruz finished by saying that as a Texan, he believes that what happened in Odessa was “sick, deranged and horrifying” and that violent criminals with mental illness should be stopped “before they murder”, arguing that he is currently leading the fight in the Senate against these tragedies. The senator concluded the thread by stating that Democrat’s urge to confiscate guns will not “prevent mass-murders”, but rather “weaken our self-defense”.

10/x Playing politics w/ these deranged crimes—and trying to use them as an excuse to violate the constl rights of law-abiding citizens—won’t make anybody safer. Forcible gun confiscation (as some 2020 Dems urge) won’t prevent mass-murders. But it would weaken our self-defense.

​Milano responded to him briefly by saying that she would “love to come in and meet” with the politician to discuss life issues – including the pursuit of happiness – and offered Cruz to have a joint “live-stream” session so that the American people could hear his “bulls**t 1st hand”.

I’d love to come in and meet with you on the gun issue and many other issues that include life, liberty and the pursuit of happiness, @tedcruz and also, 1 Peter 4:8.

I’ll be in DC next week. We can live-stream the meeting so the American people can hear your bullshit 1st hand. https://t.co/S3ljfjjOtG

​Many netizens supported Cruz by arguing that it was “none of [your] business” to discuss “what arms we have” and also by asking whether the actress could show “where in the Bible it’s okay to murder babies”, referring to the liberal activist's pro-abortion stance.

We have a right to bear arms period. What arms we have is none of your business. The forefathers did state that we have a right to own better arms than the military possesses. "SHALL NOT BE INFRINGED!"

Could Alyssa Milano show where in the Bible it’s okay to murder babies!

Some, however, opposed the Texas senator’s Twitter thread by pointing out that “none of the shootings have involved defence of family”.

It is worth noting that none of the mass shootings have involved defense of family. And an assault weapon has the sole purpose of killing as many people in as little time as possible. Unlikely to have to defend family with such a weapon

We have a right to Life, as you just mentioned. And one of the main functions of government is to keep its citizens safe. You are doing a horrible job at that. And a good guy with a gun has failed to stop mass shootings several times now.

Alyssa Milano, a 46-year-old actress, has previously expressed her support for the Democratic Party in its campaign in the 2020 election and announced the creation of a fund that would potentially help them secure victory in the key swing states of Pennsylvania, Michigan, and Wisconsin.