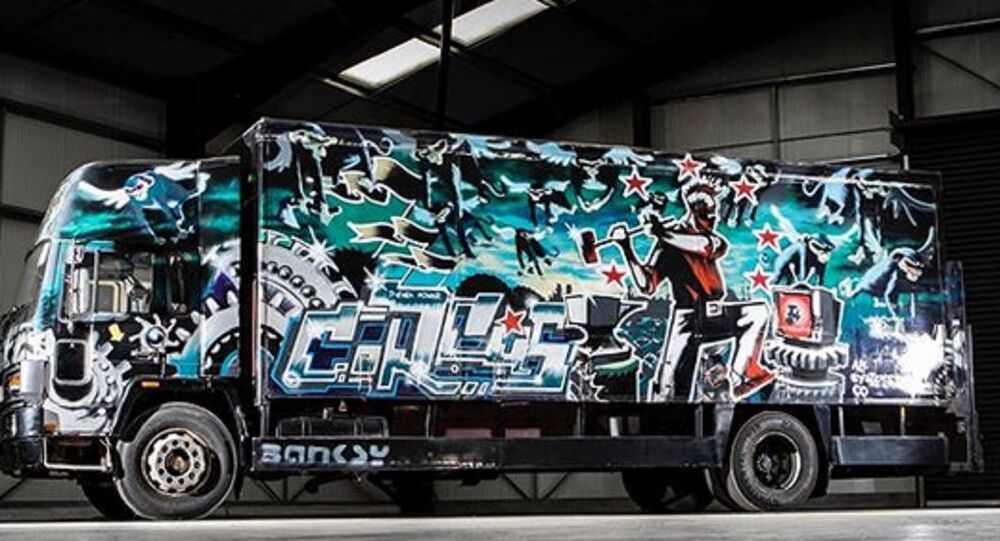 According to the media, the truck was covered with graffiti by Banksy in 2000 when he was still unknown, for the global artist community. A preliminary estimate of this so-called modern masterpiece is reported to be between $1.2mln - $1.8mln  (£1mln - £1.5mln).

“Banksy is arguably the most important artist to have emerged since the millennium and this, his largest commercial work, represents a new high watermark of quality for works of his to appear at auction [...] The composition bears all the hallmarks of this peerless agent provocateur”, the head of postwar and contemporary art of the Bonhams auction house, Ralph Taylor, gushed, cited by the Guardian.

According to Taylor, cited by The Guardian, Banksy was at an open-air party in Spain to celebrate the millennium when he was presented with this truck by Mojo, the co-founder of Turbozone International Circus. Banksy then reportedly started his work on the truck during the party and continued to work on it for a fortnight. It was then used, for years, as the company’s transport around Europe and South America.

“It is an enormous great lorry [...] Contemporary art can be anything, from a small painting to an installation that takes up an entire room. This is a 17-tonne lorry and it is completely painted. It’s an immersive experience […] It is incredibly impressive when you see it”, Taylor said, cited by the Guardian.

Taylor told The Guardian that the painted truck is a very important and unique masterpiece, because this work marks a pivotal moment in the career and life of the famous graffiti artist, a time when Banksy was reportedly beginning to work in a studio environment - not just outside guerrilla graffiti strikes.

The artwork will reportedly be sold by the Bonhams auction house on the Goodwood estate in West Sussex on 14 Spetember.

Banksy Makes Surprise Appearance in Venice, Allegedly Gets Kicked Out by Police