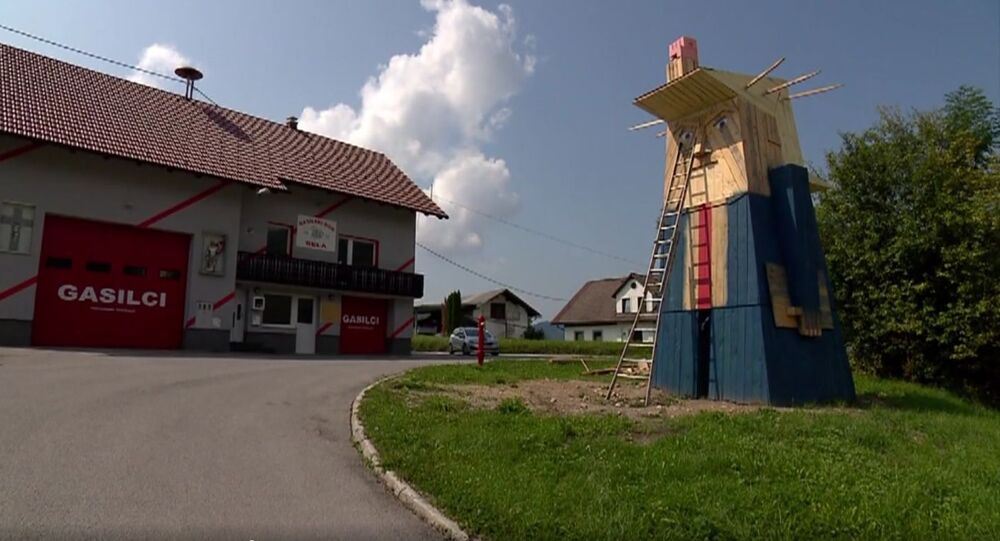 Trump's Slovenian monument will now rival a statue of Melania Trump that appeared in the first lady’s native country in July. The statue has been a hot topic of conversation among the Slovenian public with some viewing it as merely a “joke.”

A nearly eight-metre tall wooden statue of Donald Trump has emerged in the village of Sela, around 30 kilometres from the Slovenian capital Ljubljana, as reported by local TV station Kanal A.

The statue features the US president wearing a blue suit and red tie, with his right arm raised in the air in a clenched fist salute. It was reportedly erected by Tomaž Schlegel with the support of local members of the Sela Sports and Cultural Society.

While the monument is still under construction – with the grand opening planned to take place on Saturday, 31 August - the local outlet Reporter states that some kind of “surprise” will accompany the ceremony.

The architect told the local tv channel that the statue showed Trump in a pose similar to that of Superman or the Statue of Liberty, but also noted that the monument itself was a “provocation, because the world is full of populism”.

Washington Post journalist Mary Jordan suggested that the wooden Trump might look like a “Presidential Nutcracker”, while some Twitter users asked whether the statue was “commissioned by Melania,” recalling an earlier Slovenian monument featured the first lady.

After the much debated abstract wooden Melania Trump statue in Slovenia. There’s now one of her husband too, and it's similarly flattering. Or, judge for yourself. https://t.co/TIEZKypwMg pic.twitter.com/AJ313z7ayC

@realdonaldtrump Wonder if this was commissioned by Melania. It’s a good likeness, for sure! Wooden statue of Trump pops up in Slovenia, his wife’s home country. #IllegitimatePresident https://t.co/0yzpknQF4p

​Some Slovenians even mocked the statue by comparing it to the infamous Ronaldo monument in Madeira airport.

One user known as "obožeobože" writing in the commentary section said: "Like Ronaldo at the airport!" (Kot Ronaldo na letališču!). Another netizen exclaimed "Where are the real artists? That's painful!" (Kje so pravi umetniki? To je bolano!).

On this day in 2017, THAT statue of Cristiano Ronaldo was unveiled to the world! pic.twitter.com/cBjrS7rsmz

​The newly erected piece of art has been met with various reactions from locals who were not consulted about the construction of the monument. Some of them say that the wooden Trump does not fit with its environment and may serve only to bring ridicule down on Sela.

Igor Omerza, a former member of Slovenian parliament who has written extensively about Melania told the Washington Post that the statue may represent Slovenia’s “love-hate” relationship with Trump.

“Trump is always in the news,” Omerza said. “I don’t believe the young people in this village who built this are in favour of him.”

Earlier this summer, a three-metre high wooden statue of Slovenia-born Melania Trump dressed in a blue outfit that she wore to her husband’s inauguration, appeared near Sevnica. It was widely ridiculed by the public, with some netizens calling it a “disgrace,” although others praised the artist’s talent.