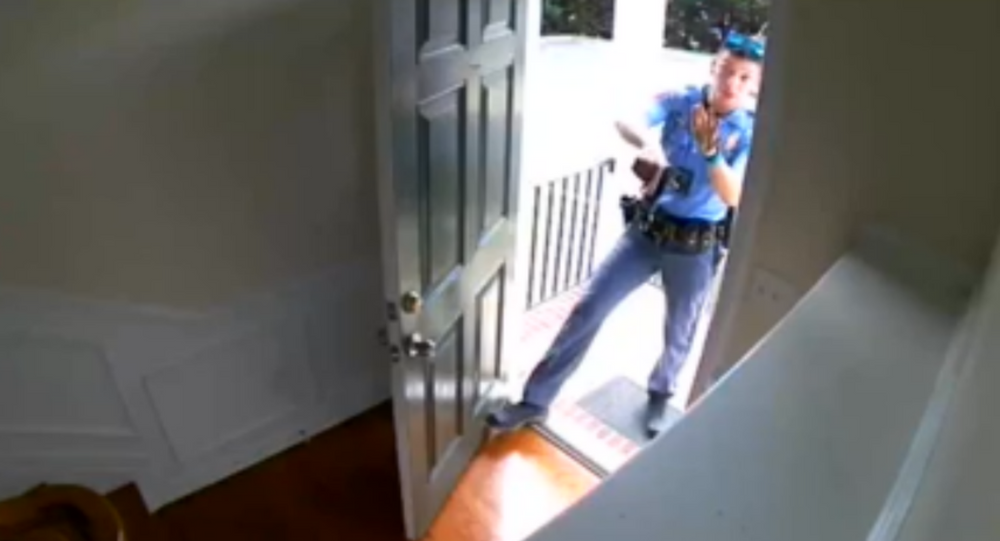 ‘Most Humiliating Experience’: US Man Handcuffed in Own Home Over False Burglar Alarm (Video)

Surveillance video of a man being handcuffed and detained by a police officer in his own home in Raleigh, North Carolina, has gone viral, once again raising questions over excessive and unjustified use of force by police officers.

The incident took place at Kazeem Oyeneyin’s house on August 17 and was captured by his home security camera. According to Oyeneyin, the series of events unfolded after his friend accidentally set off an alarm in his home. After turning the alarm off and going back to bed, Oyeneyin heard someone entering his unlocked front door. It’s unclear why the front door was unlocked.

"I just laid back down, and all I heard was somebody screaming downstairs," Oyeneyin told KTXS. "So I grab my firearm because I don't know what's going on. And I run down the stairs, and it's a cop.”

Oyeneyin, who is a 31-year-old club promoter, came to the door carrying a gun because he was concerned that someone was breaking into his home. He found a police officer holding a gun standing at his front door.

"Hey, come out with your hands up!" the officer is heard yelling.

"I've got a firearm in my hand," Oyeneyin responds.

Oyeneyin immediately drops his gun and is handcuffed by the unidentified officer before being pinned against the wall.

“I’m just trying to figure out who you are, all right, and whether you are supposed to be here or not,” the police officer is heard saying in the surveillance video, assuming that Oyeneyin, who has lived in the home for the last five years, was a burglar because the security alarm had gone off. The officers were responding to a “4-4” code, which is police code for a burglar alarm, according to a police report.

Throughout the encounter, Oyeneyin asks the police officer why he is being handcuffed, to which the officer does not provide an adequate response. The police officer also fails to ask for the homeowner’s identification card until Oyeneyin is already handcuffed.

When the officer says he “made several announcements” before entering the home, Oyeneyin explains that he was sleeping and could not hear the officer. He also responds to the officer’s question about him holding a firearm - for which he owns a concealed-carry permit - by explaining that “people try to rob” him “every day” as a club promoter.

More officers eventually arrive at the scene. While the officer explains his version of events to an unidentified supervisor, Oyeneyin explains once again that he was inside his own home.

“Bro, y’all are killing people these days,” Oyeneyin is later heard saying in the surveillance footage. “I’m at home, and I ain’t bothering no one.”

Eventually, other officers at the scene of the incident confirm that Oyeneyin is in fact the homeowner and unlock the handcuffs.In an interview with ABC11 after the altercation, Oyeneyin described the incident as “one of the most humiliating experiences of my life.”

“I was counting the seconds, because I thought he was going to kill me,” Oyeneyin also told ABC News, referring to the first police officer at the scene. “He was shaking the gun. All he has to do is slip and hit that trigger, and I’m dead.”

“I felt like my character was defamed,” Oyeneyin also told ABC, saying that he was grateful his 6-month-old son wasn’t at home at the time of the incident. “I went outside the other day, the neighbors wouldn’t even wave at me. They don’t know what’s going on. They think I’m a whole criminal over here.”

Oyeneyin told the outlet that he hasn’t felt comfortable in his home since the police encounter.

However, Oyeneyin’s encounter with police is not unique, according to Kerwin Pittman, executive director of Recidivism Reduction Education Program Services.

"It's a lot of stories like this that go untold. There's no reason this man should have been pulled out of his house, not asked for paper ID and it progressed that far. This man was criminalized, humiliated, stigmatized in his own home,” Pittman is quoted as saying by multiple news sources.

In a recent statement to ABC11, a Raleigh Police spokesperson confirmed that the department is investigating the incident.

“The Department is looking into this incident and reviewing our officers' actions. We have attempted to contact the homeowner several times over the past few days to discuss this incident with him,” the spokesperson is quoted as saying.