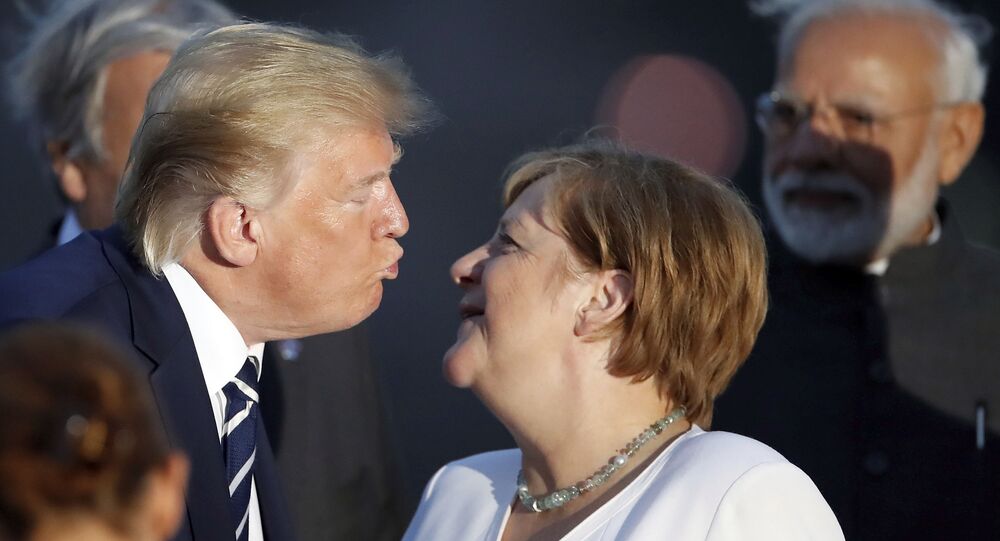 Apart from making decisions on world affairs and talking international politics, the leaders of the group of seven also had time to socialise with their better halves during the summit in Biarritz. It seems like the French seaside put some of them in a more playful mood.

US President Donald Trump seemingly puckered up to smooch German Chancellor Angela Merkel despite the rocky relations between the two countries over a number of issues as the two posed for a family photo during the G7 summit in the French city of Biarritz. While commenters have previously pointed out awkward moments between the two during their previous meetings, this time the POTUS gave his counterpart a double kiss before a traditional dinner at Hotel du Palais. He even closed his eyes, the chancellor, however, kept her eyes open - some suggested she could not resist Don’s charms. The moment, caught on camera, has prompted a wave of joking comments online.

Voilà: I always said Merkel would not resist Trump's affection when she can get it. Too bad one cannot hear what she said to him after the first cheek kiss so that he decided to give her another one : ) https://t.co/EESjf4HhiQ

You can't draw a cartoon any worse than the reality of seeing this! Can you imagine the horror of being kissed by this orange #sphinctermouth?https://t.co/GUxVA4ABP1

Angela Merkel was not the only one who was in a kissing mood around Trump. French President Emmanuel Macron’s spouse, Brigitte, took the initiative and gave a smooch to Trump.

And then Trump made Brigitte Macron kiss him on the cheek. Ugh. pic.twitter.com/0EgxywrDtC

​Others seemed more interested in Emmanuel Macron’s reaction to his wife kissing the US president.

​However, it was US first lady Melania Trump’s moment with Canadian Prime Minister Justin Trudeau that prompted a proper Twitter storm. Some netizens believed that Donald Trump’s wife seemed too pleased kissing the Canadian politician to go unnoticed.

Find you someone that looks at you the way Melania looks at Justin Trudeau. pic.twitter.com/nOVyIijknE

Wow!! This picture is worth a 1000 words!
She’s never looked happier or even happy for that matter. She would love to "escort" Trudeau someplace! 😂😂😂😂 #Melania pic.twitter.com/YgKJZsKR3O

​Some mentioned a similar reaction that the Canadian “charmer” got from Ivanka Trump, whose gazing at him had already become a meme.

Get yourself someone who looks at you like Ivanka and Melania look at Justin Trudeau. pic.twitter.com/1QO3xEPECQ