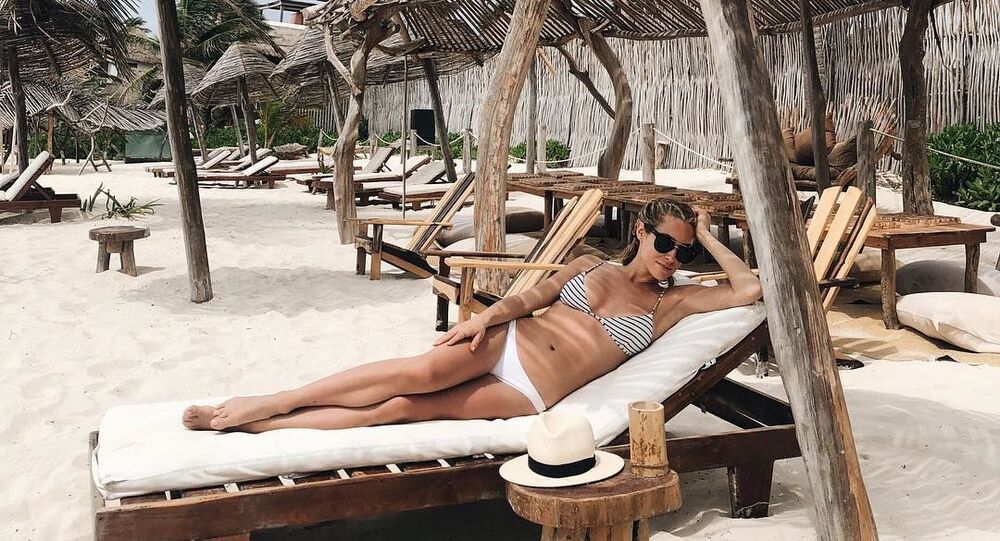 American fashion designer and actress Kristin Cavallari, who shot to fame in 2004 after being cast in the reality TV show Laguna Beach, occasionally shares secrets of her healthy lifestyle with her fans, but some of her Instagram followers think that the mom-of-three needs to put on some weight.

Kristin Cavallari, who once revealed her favourite healthy food recipes in the "True Roots" cookbook, is being body-shamed on Instagram after she shared a couple of snaps from a beach photoshoot for her jewellery brand, Uncommon James.

In one of the photographs, a topless Cavallari is flaunting her toned body in a pait of belted white bottoms on Mexico's Pacific coast, near Puerto Vallarta, while in the other she's chilling in a pale blue two-piece on a yacht.

While much of the feedback has been positive, with many of her 3.7 million Instagram followers asking the Very Cavallari reality show star to reveal the secrets of her stunning figure, some commenters accused her of being "all skin and bones" and "looking sick".

"When eating ‘healthy’ makes you look sick, maybe it’s time to eat a little unhealthy. A grown woman with the body of a 10-year-old boy is not normal and it never will be. Just think, the camera adds 10 pounds, so in person she must really look like she’s on her death bed", one user wrote.

Another follower agreed, saying that she's "tooo thin" and suggested that she "go eat a burger, or a real full meal!!"

"LOL! LONG ASS CHICKEN LEGS! NO MEAT ALL SKIN AND BONES", a fellow Instagram user chimed in, while someone speculated that Cavallari might have an eating disorder.

Her loyal fans, however, were quick to clap back at haters, saying that Kristin looked gorgeous and they simply couldn't believe those body-shaming comments.

"I am so tired of grown women thinking the comment section is an appropriate place to body shame and disrespect other women. It’s really disgusting that with all the negative things going on in our country you feel the need to anonymously add your beatdown of a beautiful, successful woman to the list", one comment read.

Another follower cheered on the reality show star, "Skinny or big … why do people always have something to say? We are all way too hard on our own bodies — why do we have to be so hard on other women’s bodies too? Look at that smile. She’s so happy and that’s all that should matter".

This is not the first time that Cavallari has been targeted on social media: three years ago, users mom-shamed her after she shared a photo of her children, and accused her and her husband, football player Jay Cutler, of starving them.