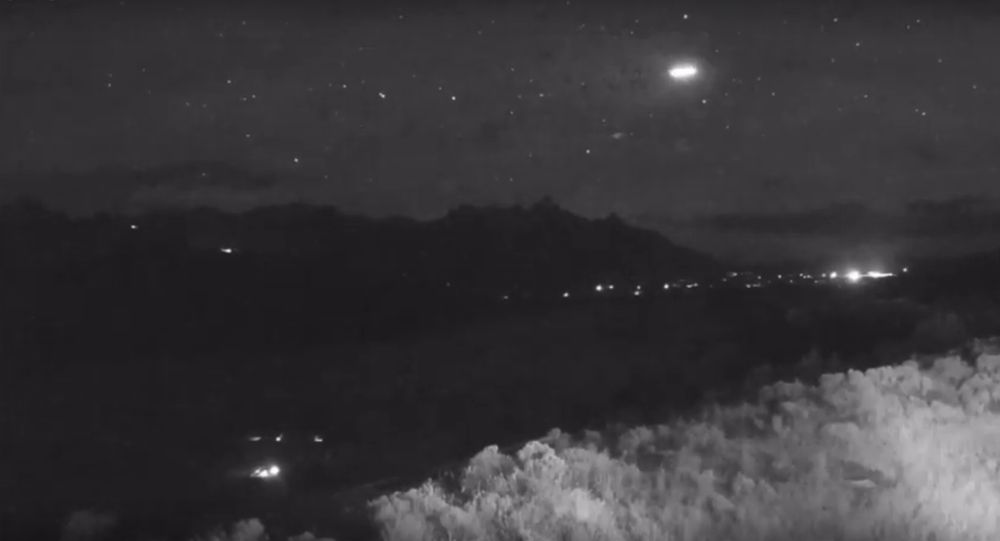 While experts interviewed by local media suggested that the strange flying object might have been a drone or a fighter jet, some social media users suggested that it was actually produced by something on the ground.

An enigmatic sight was spotted by onlookers in the US state of Wyoming during the Perseid meteor shower earlier this week.

The footage, which was obtained by local news website Buckrail and the veracity of which couldn’t be immediately confirmed, shows a strange oval shape gliding across the sky early on 12 August, flashing briefly before it disappears.

"It would totally be a plane in my mind if there weren’t a weird, bright flash in the end," the woman who observed this sight said, as quoted by the Daily Star.

Several experts contacted by the media outlet speculated that the object might have been a drone or a military jet.

Social media users commenting on the video on YouTube also mulled a number of theories, ranging from a subsonic cruise missile to a space station, while a number of UFO conspiracy theory channels asked Buckrail for permission to use the footage.

Some social media users noticed that judging by the time code, the video was "sped up" by the uploader, with one netizen speculating that the "object" featured in the video is merely the product of a train’s headlight.

Earlier, another enigmatic airborne phenomenon was sighted in the Netherlands where some strange glowing objects were spotted soaring near a tornado.