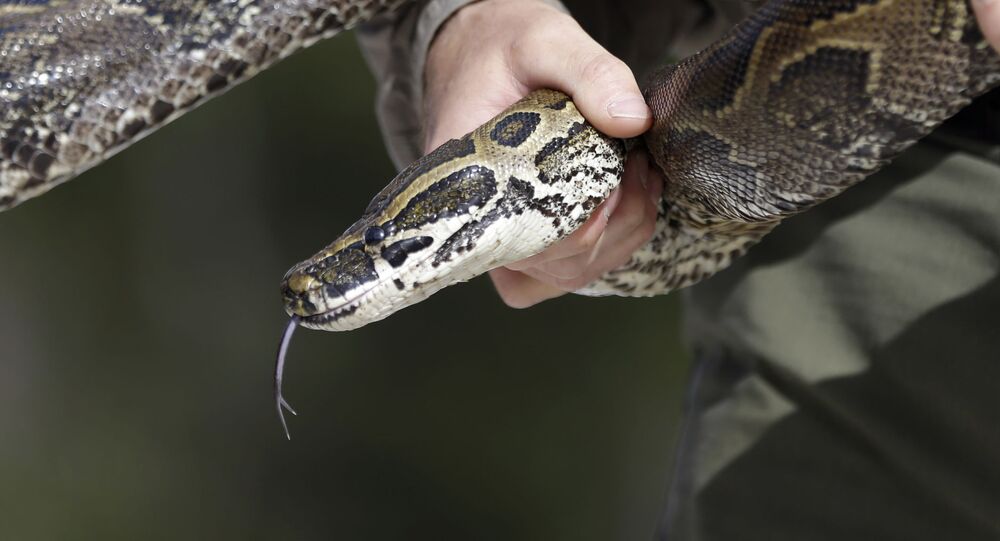 Pythons are famous for being able to swallow victims much larger than themselves, but it is quite rare to be able to record on camera the moment when a python’s fully-grown prey is not only swallowed but then also regurgitated.

A local resident in Udaipur, India caught on camera the disturbing moment that a python regurgitated a large-sized dog.

In the video, which some viewers might find disturbing, the 4-metre-long reptile, identified as a rock python expels the whole body of a dog that it had apparently swallowed in a nearby forest.

"On Wednesday morning, we were on an animal rescue operation," said the man who filmed the video as cited by Daily Mail. "On the way, we saw some people disturbing a 13ft-long rock python that had eaten something.  As we got closer to the reptile, it was spilling out the kill which was a street dog."

It took the python only 14 seconds to spew out its prey legs first, and then move forward after a short rest.

The local wildlife-lover who took the video explained that pythons can usually spend around thirty minutes swallowing their victims, but as it takes a lot of energy, a reptile can regurgitate its prey in order to preserve its resources, in case any threat or predator is identified nearby.

Unfortunately, there was no survival miracle as the dog is believed to have been killed before it was swallowed.

It has been long noted by biologists that pythons can swallow prey of larger dimensions than their own bodies due to the fact that their jaw bones are not connected. They kill animals such as mammals or birds through constriction that make their hearts stop from restricted blood supply, after which victim can be swallowed head first.

In 2017 there was a case in Indonesia where a 7-metre-long python killed and swallowed a 25-year-old palm oil plantation worker Akbar Salubiro, who had gone missing a few days earlier. He was found inside the python, as the disturbing video posted by local media showed.