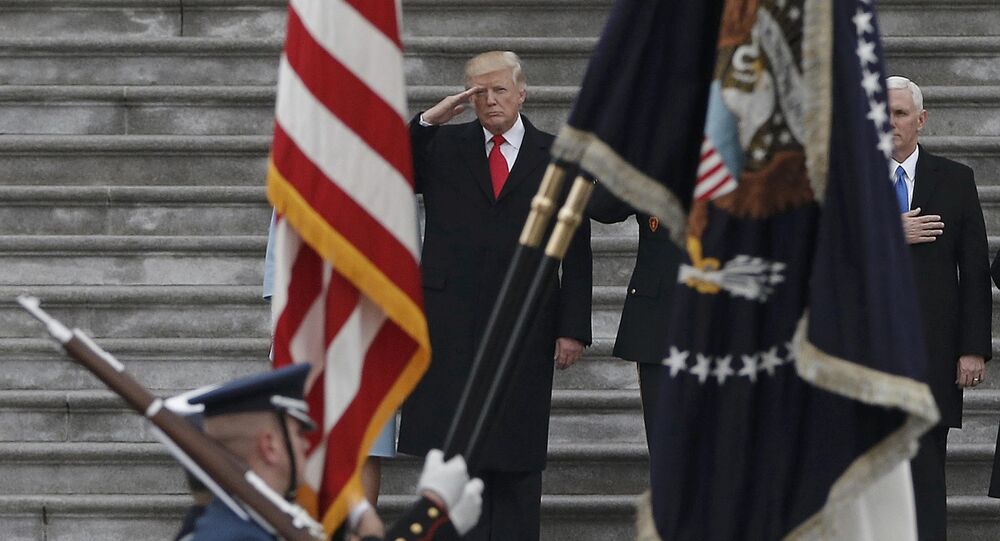 On Saturday, Rosatom confirmed that five of its employees had been killed and three more injured after an explosion rocked a rocket test site in northwest Russia during testing of a new liquid propulsion system, with US media claiming the test involved a new Russian missile system.

US President Donald Trump has been savaged online for tweeting about the alleged “failed missile explosion in Russia,” and bragging about America’s supposed "similar, though more advanced, technology".

Citing US intelligence assessments about the testing allegedly involving the 9M730 Burevestnik, NATO reporting name SSC-X-9 ‘Skyfall’, an experimental nuclear-powered and nuclear-armed cruise missile with an unlimited range, Trump exclaimed that the “Russian ‘Skyfall’ explosion has people worried about the air around the facility”, adding that the situation was “Not good”.

But Trump’s tweet didn’t go over well among some followers, who accused him of “blathering uncontrollably on national security issues about which he knows nothing.”

I guess it’s just normal now that a president blathers uncontrollably on national security issues about which he knows nothing, and doesn’t care to learn. On Twitter.

“You’re reporting on US intelligence gathering via Twitter? What the hell is wrong [with] you?” one user asked, with others expressing similar sentiments.

What the hell is wrong for you?

Assuming he's not lying, Trump would seem to be casually tweeting out national secrets. https://t.co/7NiWD19aXh

Tweeting about the status of secret nuclear weapons research, as one does https://t.co/wpZQ5rjRl4

David Burbach, a professor of international relations at the US Naval War College, accused Trump of being less than truthful about the US’s own alleged “secret nuclear-powered super-weapons”.

It is a bad idea for the President to tell the world the U.S. has secret nuclear powered super-weapons and that we've been lying about that for years. Especially if we don't actually have them, which we almost certainly do not. https://t.co/pK0sNPRpeg

Others charged the president of either “lying/bluffing about our capabilities,” or actually “revealing our secret weapons to the world” and asking “which is worse?”

So, is the President of the United States lying/bluffing about our capabilities (we don't have missiles with tiny nuclear reactors) or just revealing our secret weapons to the world... Which is worse? https://t.co/LpO7bY1nlI

Some thrashed Trump for his choice of words, and specifically the words “not good,” or expressed sarcasm over the president’s attempt to one-up the Russians.

JFK: “We have detected the presence of Soviet missiles in Cuber. Not good!”

RWR: “Mr. Gorbachev, this wall is not good!”

"not good" is our Third Grade President's assessment of a nuclear disaster. thank god he's being advised by actual nuclear experts, like Rick Perry at the Department of Ener— oh hell, we're all going to die

No surprise. We are the oldest country on Earth and invented freedom. The Russians don’t even have the internet yet.

The American people are terrified that a narcissistic moron has the nuclear football. Much more terrifying than a Soviet missile failure.

Rosatom did not provide details on the specifications of the rocket system involved in the deadly rocket test incident, which took place last Thursday at an offshore naval test range in Russia’s Arkhangelsk region, saying only that the tests involved “new pieces of armament”, and that the five engineers who died in the blast did not die in vain. Three other engineers, employees of the Sarov nuclear centre, were injured and are now recovering in hospital.

On Tuesday, Kremlin spokesman Dmitry Peskov said Moscow was not surprised by President Trump's tweet about US developments in advanced missile technology, but stressed that Russia's developments in this area remain "far ahead of the levels reached by other countries", including the US. He added that the relevant agencies were involved in guaranteeing the safety of people living in the area around the accident site.

Trump Comments on 'Missile Explosion' in Russia, Boasts of US Having 'More Advanced Technology'