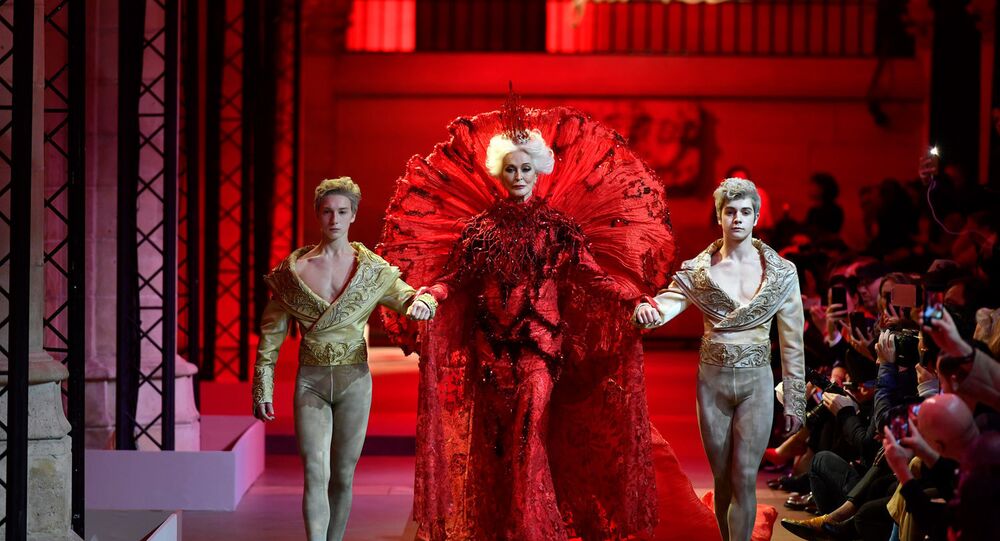 As the most famous clothes designer in China's haute couture industry, Guo Pei continues to shine with her marvellous and glorious designs.

"I am a lucky woman because I am doing what I am passionate about. I want to keep designing clothes when I am in my 50s or even 90s," Guo told the Global Times on Friday, her eyes shining with excitement.

Born in Beijing in 1967, Guo became interested in clothing as a child. She often helped her mother make clothes. After graduating from Beijing Second Light Industry School with a degree in fashion design in 1986, she kept exploring the professional field and set up her own business, the Rose Studio, in 1997, becoming a pioneer for China's Haute Couture. In 2016, she became the first Asian guest member of the Chambre Syndicale de la Haute Couture and was listed as one of Time's 100 Most Influential People later that year.

"I initially designed ready-to-wear garments for large-scale production, and did not do private custom clothes until one customer asked me to help her design an outfit. I was a bit reluctant at first because I thought the clothes I designed were for many people and now I was going to use my talent for only one person, which was a waste. However, when I saw my customer's temperament had improved after she wore my clothing, I was so pleased and realized I was doing a very meaningful thing - improving my customer's image. This was a different kind of joy than what I got designing mass-produced garments. Gradually, I began to take private orders. At the time, I didn't think about it as haute couture, I was just following my heart and enjoying making my customers look beautiful and gorgeous. After designing a number of outfits and gaining a lot of experience, I realized that I was in the field of haute couture," Guo said.

Guo said her success in haute couture was due to her efficient and supportive team.

"Without my team, I would not have been able to establish Guo Pei haute couture," she said.

Guo said she trained her embroidering workers by having them embroider a figure of the Buddha. These employees could only start embroidering clothing after they were able to produce a Buddha figure that looked at peace.

"Many people said I am representing Chinese design, but for me, I think this is too heavy an honour. I am just doing what I like," Guo said, smiling.

She noted that qualified clothing designers do not beg celebrities to wear their clothes to gain a reputation. On the contrary, she noted that stars will come of their own volition if they truly like a designer's work.

At the China-themed New York Met Gala in 2015, Barbadian singer Rihanna captured the spotlight when she appeared on the red carpet wearing a gorgeous yellow gown designed by Guo. The image of Rihanna captured the attention of the audience and media, spawning viral memes on Western social media.

"That was the first time I got to feel how powerful social media and celebrities' influence on the public can be," Guo said.

She told the Global Times that the yellow gown she designed took her team numerous hours to make.

"I did not how to improve the design anymore. I wouldn't change the design for anyone because it is perfect in my heart," Guo said.

"Some people ask me if I have a favourite work after designing so many clothes. I think they do not know me, because as a designer all the clothes I have designed are like my babies, and it is very difficult for a mother to choose which baby she likes the most," she said.

"I feel very pleased that I am helping China's haute couture become known to the world and gradually convincing the world that haute couture is not only clothes but also a kind of art," Guo said.

She said she just signed a contract with Sotheby's, one of the world's largest brokers of fine and decorative art, jewellery, real estate and collectables, to have clothes designed by Rose Studio sold at auction.

"This is the first time that clothing has been auctioned as artworks, which means my idea that designing clothes is designing art is being accepted by the world," Guo said, going on to say that after her first solo show, many of her friends asked her to make business attire, but she insisted that the haute couture she designed should be art.

After years of persistence and effort, professionals in the haute couture field have come to recognize the idea, which has, in turn, elevated the position of haute couture.

"I just want more people to know about clothing design. As a kind of artwork, it does not have a border. Everyone can enjoy its beauty because my designs are also a language, touching people's souls," she said.

Stars From Heaven and Inferno Inmates: Whom Met Gala 2018 Brings to New York