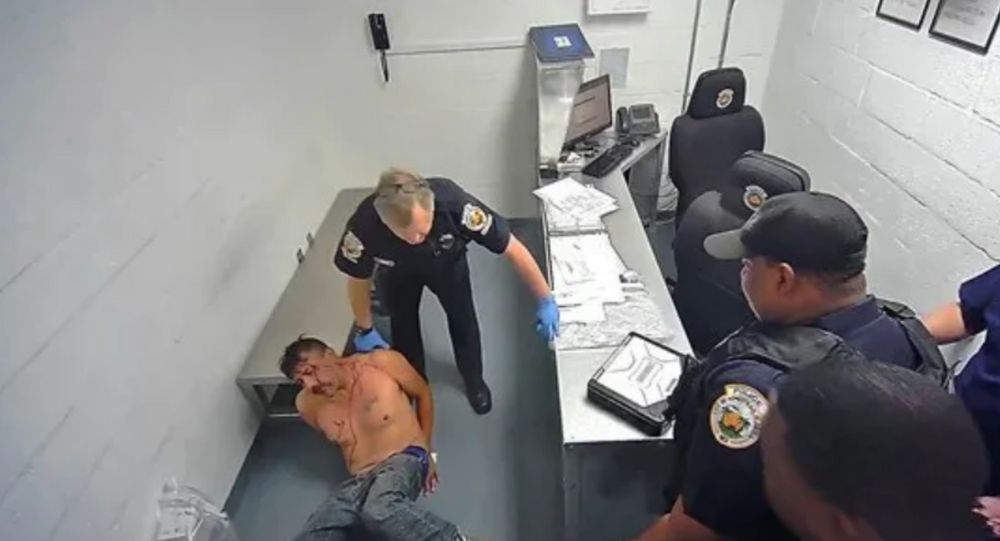 A Homestead, Florida, police officer was charged this week with felony battery and official misconduct for shoving a handcuffed inmate into a wall, leaving the suspect bleeding, according to the Miami-Dade County State Attorney’s Office.

Surveillance footage of the December 1, 2018, incident recently released by the Miami-Dade State Attorney’s Office shows Officer Lester Brown, 51, slamming inmate Jose Garcia Alvarado, 50, into a concrete wall at a police substation in Homestead, causing Garcia to collapse onto the floor with blood spilling from his head. The inmate was taken to a nearby hospital, where surgical glue was used to close the laceration on his head.

In his written report, Brown lied about the incident, claiming that he walked into the booking room after hearing “commotion” caused by Garcia supposedly attacking other officers, prosecutors said. According to Brown, he grabbed the inmate’s arms, but then Garcia pushed him in order to attack the other officers, falling over and hitting his head against the wall. Brown’s version of the story is vastly different from the one revealed in the surveillance footage.

"We believe that the video evidence does not support Officer Brown's written account that Garcia attempted to attack the officers," Miami-Dade State Attorney Katherine Fernandez Rundle said in a statement this week. "We believe, as do the police officers and the police chief, that the video evidence does not support that Garcia struggled with Officer Lester Brown by pushing on him or that Garcia was injured by falling forward into the wall. There's no question that Officer Brown's initial actions resulted in the injury of Mr. Garcia."

Garcia is an undocumented migrant worker who was arrested on December 1, 2018, for disorderly intoxication and for resisting arrest without violence after breaking a house window.

"The arrest of Lester Brown is very disappointing, and overshadows the work of the dedicated men and women of the Homestead Police Department, who serve and protect our community every day," Homestead Police Chief Alexander Rolle Jr. said in a news conference Wednesday. "Police officers have a legal responsibility to abide by all laws, and Lester Brown's arrest demonstrates how seriously our police department takes that obligation."

Brown, who has been employed by the Homestead Police Department since 2007, was relieved of duty without pay pending termination this week. He was booked into jail Wednesday and released later that day after posting $10,000 bail.

This is not the first time that Brown has violently attacked inmates.

In 2016, Brown was suspended after slapping a handcuffed woman in a police station. An arbitrator in that case ruled that Brown should serve an eight-month suspension without pay or any benefits.

Where is the Disaster Relief for Police Racism and Brutality?