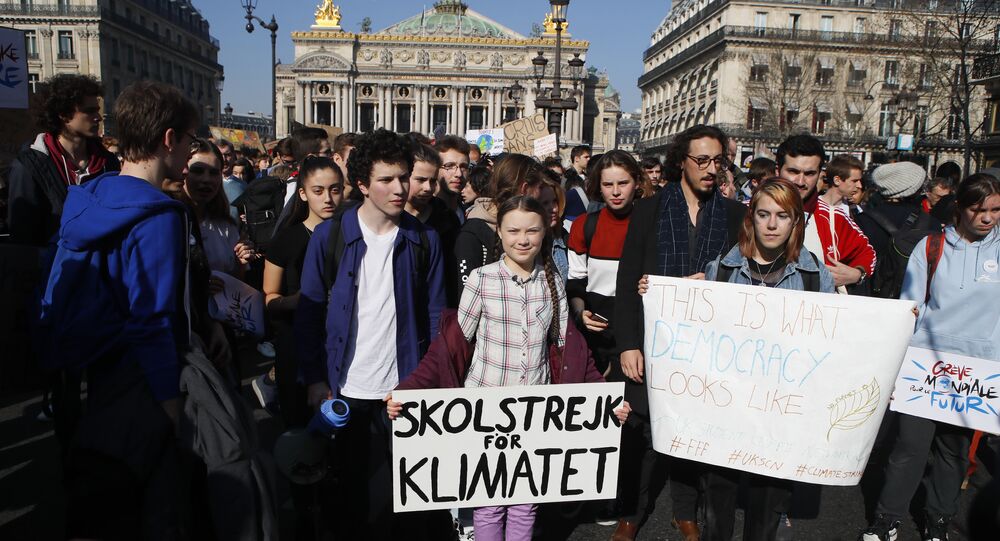 Award-winning climate activist Greta Thunberg, who was recently branded an “apocalypse guru” and the “Justin Bieber of ecology”, has once again polarised the public.

UKIP politician Neil Hamilton has sparked controversy by mocking the controversial 16-year-old Swedish climate campaigner amid a hot weather spell that has hit the UK.

“It's shaping up to be the hottest day of the year – please remember: No electric fans. DEFINITELY no air conditioning. Greta has spoken”, the 70-year-old Welsh Assembly member tweeted, posting an image of Greta Thunberg with fiery demon eyes and adding the hashtag #ClimateHoax.

It's shaping up to be the hottest day of the year - please remember:

Sally Holland, the children's commissioner for Wales, said she was “mortified” that a Welsh politician would personally attack a child on social media and stressed that she had personally written to Hamilton to voice her disappointment over his “failure to uphold high standards of public conduct”.

On Twitter, users queued to reprimand Hamilton for attacking an underage girl with autism, suggesting this constituted bad manners and foul play.

So in your view photoshopping demon eyes on a 16 year old with Asperger’s is “criticism”? She’s a kid but you’re the one who needs to grow up.

You're demonising an autistic child. WTF is wrong with you?

What the fuck is this shit?

Did you actually photoshop a picture of a teenage girl in effort to bully her?

What is wrong with you?

​However, many sided with Hamilton, by stressing that if Thunberg is old enough to have her views taken seriously, then she is not above criticism. Others suggested that Thunberg is merely being exploited by the establishment.

And that makes her invulnerable to criticism? By this logic then her opinion doesn't matter until she's an adult.

Can we remember Greta is a child and is only what is whispered in her ear,They say she is also on the spectrum and as such is open to manipulation by adults that should be protecting her,so yes let's remember she is just a little girl and be mindful of who is exploiting her.

​Responding to the criticism, Mr Hamilton, who is AM for the Mid and West Wales region, told the BBC that Greta Thunberg had “very publicly entered the adult realm of political controversy”.

“If cabinet ministers such as Michael Gove take the opinions of this 16-year-old seriously then public criticism of her should be fair game”, he said. “Miss Thunberg is currently pushing for policies estimated to cost the UK taxpayer £1 trillion which will hit the poorest the hardest”, he added.

The incident comes after yet another controversy surrounding Thunberg, who shot to fame by her “school strikes for the climate” campaign and recent calls for adults to join them. Already the winner of many awards and a Nobel Peace Prize nominee, Thunberg was recently awarded France's Freedom Prize for her environmental activism.

Ahead of her meeting with French MPs, members of the Republican and National Rally parties boycotted the eco-activist's plea for lawmakers to support her climate campaign and instead branded her a doomsayer.

Guillaume Larrive of the conservative Republicans described her as an “apocalypse guru”, whereas National Rally lawmaker Sébastien Chenu called her “the Justin Bieber of ecology”, comparing her to the singer, who also rose to world fame as a child.