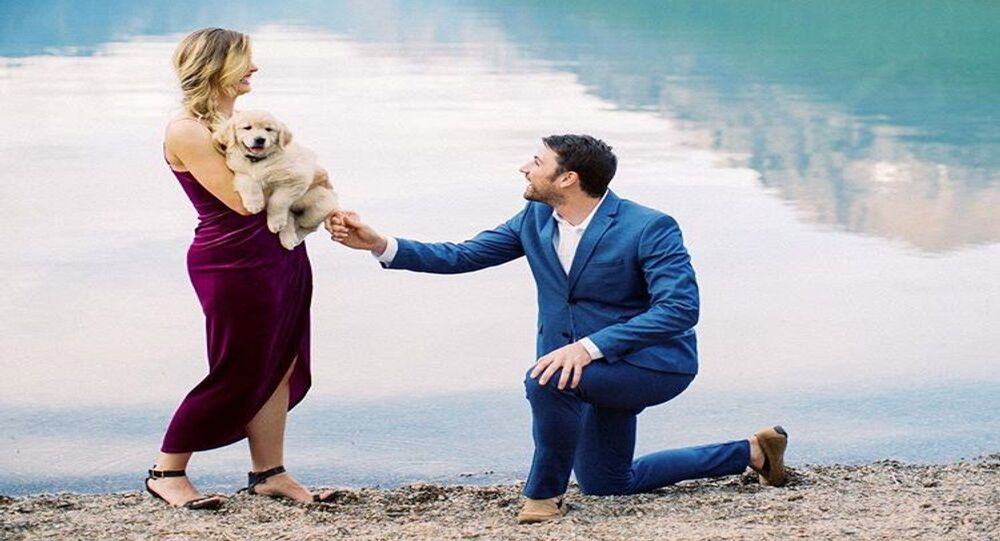 A moment of pure-gold happened on 11 July when a 30-year old Montana dentist proposed to his girlfriend, not with a golden ring but a golden retriever.

Unassuming and donning a slick velvet dress, Kadie Latimer thought she was at Montana’s Glacier National Park to model for a couples photo shoot with her boyfriend Joel Booth.

She had no idea she was going to be gifted with an adorable pup by her boyfriend of 3 years and asked if she would marry him.

Speaking to Caters News she said: “When I first turned around I was very surprised to see him holding a golden retriever puppy — my first question was whose it was."

She saw a tag with the word "Kadie" written on it, and she immediately thought Joel had named the dog after her.

“I initially thought he’d named the dog after me — but I looked closer and underneath it said, ‘Will you marry me’?”

Upon seeing him get down on one knee, any previous thoughts that the gesture would be some kind of joke vanished.

She assumed the golden sunset would be just a backdrop for her photo shoot, but it turned into something much more special.

Joel said “Kadie is special to me and I wanted to do something special for her that she wouldn’t forget.”

“I knew I was going to propose sometime in the summer and had been mulling over the idea of getting another dog — so once I knew I was getting the dog, I figured that would be a good time to propose.”

The marriage proposal was seemingly successful as the couple posted the memorable event all over social media.

We got to be a part of the sweetest surprise the other night! You might have seen a few iPhone shots on our story of a styled shoot we did with @kdlatimer and @boother1217 ...we’ll that was all for show for the real moment here!! Thank you Joel for having us, and Kadie I’m sorry not sorry for lying to you for months, haha!! CONGRATULATIONS!! P.S. I accept tips in the form of puppy snuggles 😍

Kadie commented on the viral event, saying that she "had no idea that night was going to turn into one of the most memorable nights of my life and that I’d be leaving with a puppy and a diamond ring."

“Everything was overwhelming in the best possible way.”

The pup has been named Bowie, after Bowman Lake, the location where the magical proposal took place.