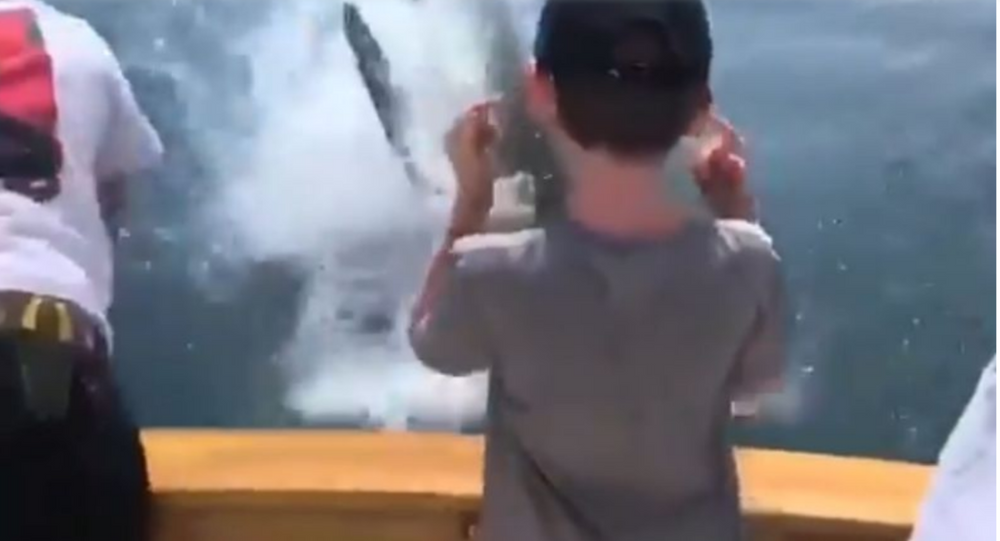 A US family fishing in Cape Cod, Massachusetts, Saturday captured the moment a great white shark leapt out of the water and snatched a bass off a fishing line as the fish was being reeled in.

Dough Nelson, who caught the incident on camera, said the incident gave his family a “pretty good scare,” the New England Cable News reported. Nelson’s son, Jack, can be seen jumping back as the shark jumps out of the water.

​“It had come up and it lunged out of the water and bit the fish, meanwhile swinging its tail up and out of the water,” Marc Costa, captain of the Columbia Sportfishing vessel on which the video was filmed, told the Boston Herald. “The shark bit the fish in half, and he took it off the line.”

The Atlantic White Shark Conservancy confirmed that the shark was a great white.

According to the National Geographic, great white sharks weigh at least 2.5 tons and can grow to be as long as 20 feet.

“Of the 100-plus annual shark attacks worldwide, fully one-third to one-half are attributable to great whites. However, most of these are not fatal, and new research finds that great whites, who are naturally curious, are ‘sample biting’ then releasing their victims rather than preying on humans,” the National Geographic notes.

Earlier this month, Cape Cod’s popular Head of the Meadow Beach was closed after “quite a few sharks” were tracked near the shoreline, according to the Atlantic White Shark Conservacy’s Sharktivity app.