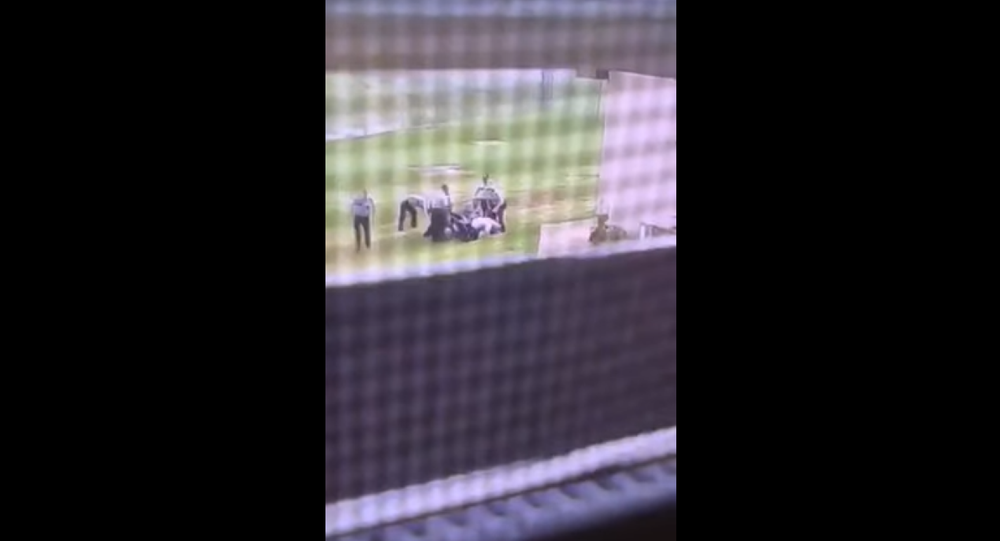 A video shot by Florida prisoners shows at least 10 prison officers beating an inmate, and now the state’s department of corrections is seeking answers.

"This is why we're in fear of our life,” an unidentified inmate at Lake Correctional Institution who filmed a five-minute video of the incident says as he narrates the events unfolding.

In the startling footage, shot through the prison’s screened windows, several prison staff can be seen piling on top of a prisoner, at times delivering blows with their fists and feet. The prisoners watching the scene can be heard worrying that the prisoner being beaten, whom they identify as Otis Miller, will be killed.

“As y’all can see, they’re beating him up,” the narrator says. “For what reason, I don’t know. They say he’s resisting, but he’s not resisting at all. He’s gonna kill him. He’s got other officers coming down to beat up one man … They’re steady beatin’ him.”

“It’s been going on for five minutes before I started recording,” he notes.

“They’re gonna hide him in confinement, no medical care, no nothing,” the inmates note. “His head’s swollen. They beat him up bad.”

The inmates note in the film that the recording was taken on July 8 at 5:28 p.m.; the video was uploaded to YouTube on July 13 and quickly went viral.

“On July 8th 2019 Captain Gaas and his crew of thug officers beat down an inmate using excessive force,” the video’s caption reads. “Blow this up and make it viral. This man didn’t receive any medical attention or anything. I myself did 2 years at this prison and saw this stuff happen with my own eyes time and time again. Now that I have video proof I want to expose these animals for what they are. Please make this video go viral! The inmate getting assaulted is OTIS MILLER a non violent offender serving over 30 years for drug sales.”

The Orlando Sentinel noted that Miller is 43 years old and has been behind the wall since 2002.

Lake Correctional is located about 30 miles west of Orlando and houses 1,100 male inmates, the Sentinel reported.

Mark Inch, who was appointed to head Florida Department of Corrections in January after having run the US Bureau of Prisons in 2017 and 2018, was quick to react to the news.

“This video is deeply disturbing. We have zero tolerance for officer abuse or misconduct for any reason,” local ABC affiliate WFLA quoted Inch as saying. “The actions of these individuals will not be tolerated. Our Office of Inspector General has launched an immediate investigation.”

"Those found participating in any level of abuse, or failing to properly report abuse, will be subject to administrative and criminal charges,” Inch said.

While Inch didn’t name any of the officers in question, he noted those identified by investigators had been taken out of contact with the prison population and “will not be allowed to return to full duty until a thorough investigation has been completed.” The inmate who was attacked has been taken to a different facility.

However, the inmates in the video identify some of the guards they recognize, including “Captain Gaas” and “Sergeant Wilson.”

Anna Eskamani, a state lawmaker from Orlando, told the Orlando Sentinel that “stories of sexual assault and violence perpetrated by state correctional officers are all too common.” She said her legislative office would be “visiting state prisons across the state - unannounced - in an effort to understand the source of these problems and eliminate abuse.”