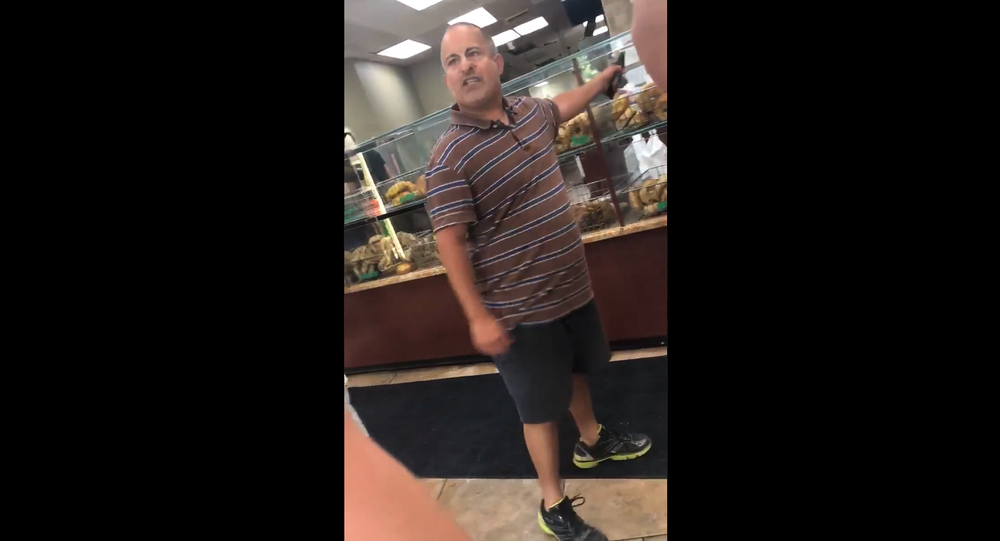 Watch: US Man Tackled in Bagel Shop After Ranting About Dating App Misfortunes

In a video posted on Twitter Wednesday morning, an irate man in a New York state bagel shop gets tackled and punched by a fellow customer after picking a fight with several people trying to defuse the situation.

A Bagel Boss shop on Long Island saw a bit of action Wednesday morning when a man was challenged on his schmears against women who he said rejected him on dating sites. According to the New York Post, the incident began when the man approached the counter to order, and a female employee working there smiled at him.

“He just went totally nuts. He said ‘why are you smiling at me?'” the store manager told the Post. “He started saying it’s because I’m short and nobody wants me.”

so in bagel boss this morning, the misogynistic douchebag seen in the video was degrading almost all of the female staff as well as other patrons. fuck this guy. pic.twitter.com/LZh1Uk4UXZ

​“So in bagel boss this morning, the misogynistic douchebag seen in the video was degrading almost all of the female staff as well as other patrons,” wrote 18-year-old Twitter user Diana Reyes, who uses the Twitter handle @oliviabradley88, in the caption to a 45-second-long video of the incident. “F**k this guy.”

“Why is it OK for women to say, ‘Oh you’re 5 feet’ on dating sites — you should be dead. That’s OK?” a man yelled at a woman who is almost off camera inside the Bay Shore location store, throwing his newspaper on the ground in a rage. When she poked a hole in his argument by pointing out that nobody in the shop had said that to him, he retorted that “women in general have said it on dating sites.”

“Everywhere I go I get the same f**king smirk with the biting lip,” he shouted.

When another male customer tries to get the man to calm down, that’s when he really gets toasted.

“Shut your mouth. You are not God or my father or my boss,” the man, who employees later said wasn’t a regular, shouted back, pointing his finger in the man’s face. “Dude, do you want to step outside? I’m not scared of you, pal!” he yelled, getting in the man’s face and bumping his chest against him.

When a second man chimes in, the belligerent customer begins to respond with the same bravado, beating his chest, saying “go ahead, attack me,” just before the second man does just that.

The much larger man in blue smears him on the ground, saying, “You don’t talk to people like that,” as the video cuts off.

“I just wanted bagels,” Reyes can be heard saying.

Suffolk County cops said they responded to the incident at about 9:20 a.m. There were no injuries and no charges filed, but an employee noted the man never paid for his whole wheat bagel, which had an egg white and swiss cheese on it.

“It was insane. I personally never have heard anyone say that, but to be there in person, it’s insane to see that someone has that mind process,” Reyes told the Post. “God forbid anything happened.”