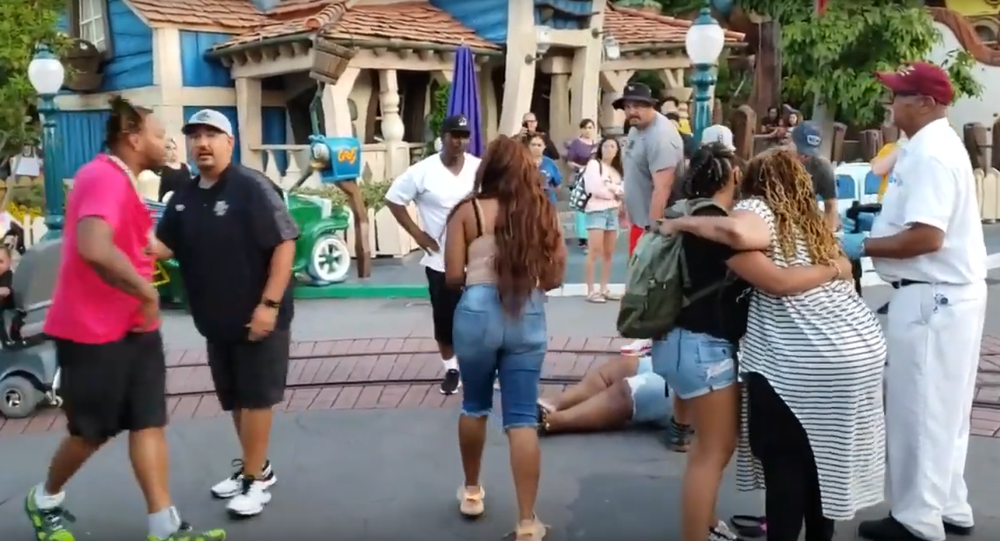 Children and fellow parkgoers in Anaheim, California, were left stunned on Saturday after a family feud of goofy proportions broke out in Disneyland’s Toontown, somehow only resulting in the brawlers being escorted out of the park.

"The Happiest Place On Earth" failed to live up to its name over the weekend after a family dispute was allowed to go on for almost five minutes before park security arrived on the scene.

Seconds after the video begins, an already enraged woman is seen spitting in the face of a man wearing a pink shirt, who retaliates with a series of blows to her head. Seemingly unphased by the punches, the woman yells for someone to hold her daughter, who is now crying in her stroller from witnessing the physical dispute.

Rather than taking his anger out on the assailant in the pink shirt, the other man within the family takes a cheap shot at the aggressor’s partner, a woman previously attempting to get the three others to come to their senses.

In an attempt to diffuse the situation, a woman in a motorized scooter, believed to be the mother of the man in the pink shirt, uses her chair to divide the two parties (to no avail, of course).

A separate argument begins between the pink-shirted man and his partner after he is told that she knocked down his mother. Despite the woman pleading that his mother was pushed over by accident, the man turns on her, slamming her to the ground and pulling her hair until other parkgoers finally jump in.

One spectator in a red backpack is seen jumping in and choking the aggressor, making him calm down while Disneyland park security simply stands on the sidelines. Even after the man is disabled, security is seen not interacting with the man in the slightest.

“We do not condone this behavior,” Disney said in a statement to KTLA, also informing the Los Angeles, California, outlet, that the family was escorted out of the park following the shocking throwdown.

On Monday, the Anaheim Police Department tweeted out a statement saying that despite the family being uncooperative, the office would continue the investigation based off the now-viral video footage.

APD is aware of a video going viral of a fight inside @Disneyland on Saturday. We responded to investigate. All parties were from the same family and were uncooperative. A report was taken. There was no video at the time. Now that we have video, the investigation can continue

In response to the video, social media users questioned the effectiveness of Disneyland security in preventing a comparable or more violent scenario from taking place at the California park.

So I saw the video and have one major question. Where the heck was @Disneyland security? A full 3:30 into violent fighting and it’s not being stopped??

I don’t car how uncooperative they are, there was no security on scene for more then 5 minutes! This is completely unacceptable for Disneyland. Someone could have been seriously hurt or killed in the amount of time it took to get any employee on site as a paying customer.

Big Thumbs down. You could have asked any person there for a look at their phones. Nobody jumped in cause they were busy filming & @Disneyland has security footage. Right? What about the 100's witnesses that saw the guy punch out 3 women? Not enough?

A number of YouTube commenters brought up how security would probably make a bigger scene or be quicker to respond if someone was caught on camera stealing or committing another minor park infraction.

“I could have had security there in seconds. All you have to do is light a cigarette,” commented YouTuber Mike Tron, while MaliceStryker said “someone should have swiped a $10 Minnie Mouse headband real quick, they'd have rolled out the Disney SWAT.”