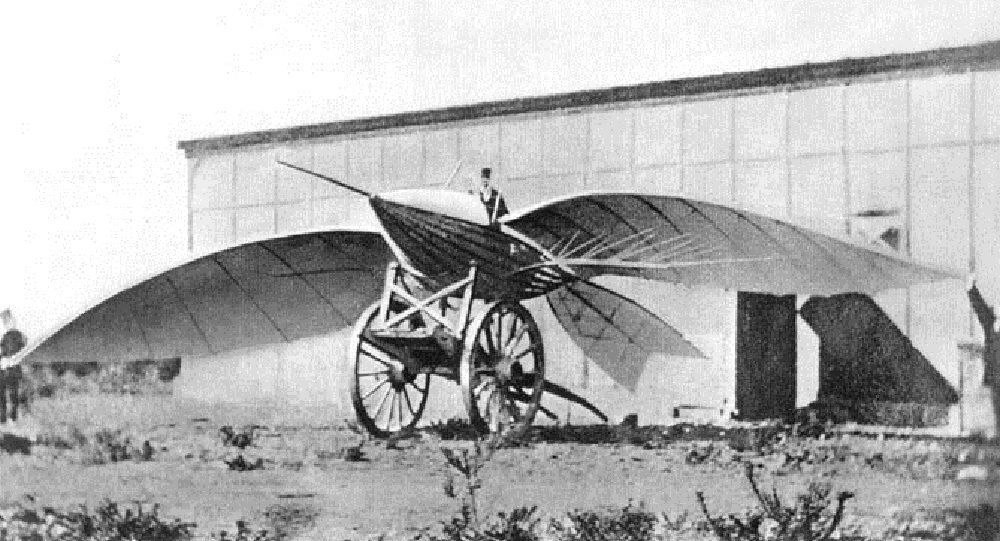 It's not clear what prompted the president's bout of historical revisionism, but the first airplane didn't take to the skies until the early 20th century.

Odd remarks by US President Donald Trump about how airplanes and airports were supposedly used during the Revolutionary War of 1775-1783 have sparked a ruckus online, with users struggling to figure out whether the mistake was a teleprompter gaffe, or whether Trump really believed what he was saying.

"The Continental Army suffered a bitter winter of Valley Forge, found glory across the waters of the Delaware and seized victory from Cornwallis of Yorktown," Trump recalled, speaking at Thursday's July 4 Salute to America bash. "Our Army manned the air, it rammed the ramparts, it took over airports, it did everything it had to do," Trump added.

Recalling that the first successful airplane flights didn't take place until late 1903, when Wilbur and Orville Write took off from Kitty Hawk in North Carolina for a series of experimental flights using the then-newfangled airplanes, social media users had a field day criticising the president over the gaffe.

"My sincerest apologies to my former 8th grade US History students for my failure to teach you about the Continental Army's takeover of airports during the Revolutionary War," one teacher quipped. "Stay in school kids!" another joked.

My sincerest apologies to my former 8th grade US History students for my failure to teach you about the Continental Army's takeover of airports during the Revolutionary War. #TrumpParade https://t.co/s1bnWMmAUY

Ever the history buff— Trump brags how the Military “took over the airports” during the Battle of Baltimore in 1814.

The Wright Brothers didn’t invent their first powered aircraft until 1903.

Trump just said the army took over the airports during the Revolutionary War.

That’s, um, 127 years before the airplane was invented. https://t.co/gnzaibATR5

"Watching Trump's speech, my son turns to me and said 'did he say airports? Does he think they had airports in the 1700s?' My son is 11!" another user wrote.

Watching Trump’s speech, my son turns to me and said “did he say airports? Does he think they had airports in the 1700s?” My son is 11! #TrumpParadeFail

Others got more creative, making up fake quotes by General George Washington about the airplanes at Valley Forge, or even inserting World War II-era planes into paintings dedicated to the battle.

In honour of those glorious airplane pilots at the Battle of Valley Forge, here is a direct quote from G. Washington himself! Thank you, Donald Trump, for reminding us how the good ol’ USA’s Continental Army took the British airports in the Revolutionary War! #TrumpParadeFail pic.twitter.com/8FDvsJopax

A few users got conspiratorial, asking whether the president's speech writers were "dumb as hell" or if they "hate" the president and deliberately put in the 'airports' line to make him look foolish.

OMGEEE! Either Trump speech writers are Dumb as Hell or they Hate Trump! Someone please explain to Trump what happened in 1812, 1814 and don’t forget those revolutionary airports! 😱😱😱😱😱😱😱😱#TrumpSpeech pic.twitter.com/43qhZkY61i

Others took pot shots at other moments from Trump's speech, including his alleged claim that the Continental Army was named after Washington, that British General Charles Cornwallis was from Yorktown, that the Second World War took place a century after the First World War, and about the 'Rockets' Red Glare' line which Trump used to apparently refer to the Revolutionary War actually referring to the War of 1812, "which Washington had nothing to do with since he was dead."

Correcting President Trump :
1 - The Continental Army was not named after Washington.
2 - General Cornwallis was not from Yorktown he was from britain.
3 - There were no Airports or planes in "Revolutionary War" or The War of 1812.
4 - WW2 wasn't a century after WW1 only 21 yrs. pic.twitter.com/uOe7TcfZnV

Trump History Lesson; George Washington won the American Revolution by seizing the airports. Also the line about the "Rocket's Red Glare" at Fort McHenry refers to the War Of 1812 which Washington had nothing to do with since he was dead. #TrumpParade #TrumpSpeech #4thofJuly pic.twitter.com/1gO06NjbGv