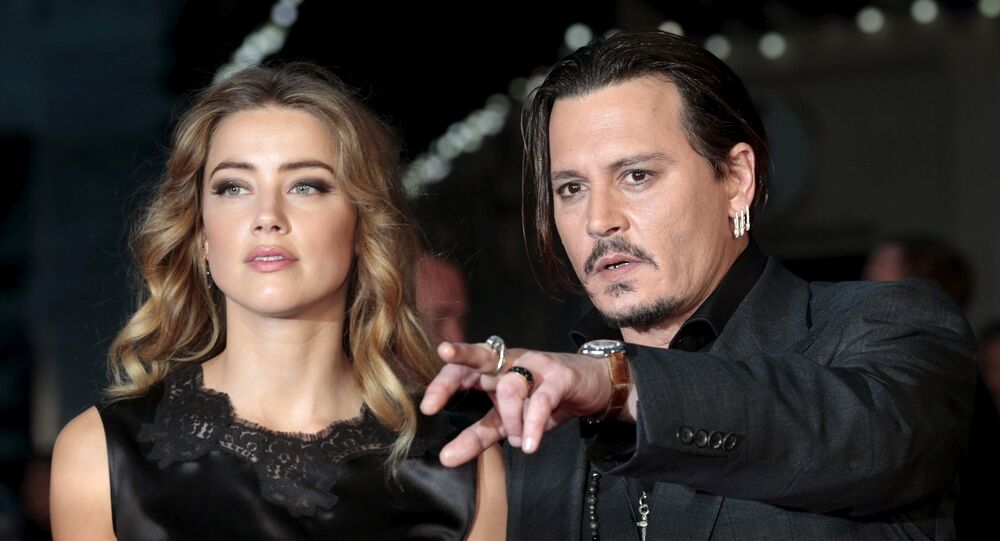 The Rum Diary co-stars’ marriage ended in 2016 – just a year after the couple tied the knot. But their divorce is still making headlines due to a relentless string of lawsuits.

Actor James Franco has been issued a subpoena by Johnny Depp’s legal team over a video purportedly showing him with Amber Heard, Depp’s ex-wife, on an elevator one day after the Pirates of the Caribbean star allegedly gave the Aquaman actress a black eye in a marriage-ending altercation, The Blast reported.

The surveillance video was taken inside the elevator at Depp’s Los Angeles apartment building, and his legal team now wants Franco to testify about his visit to Heard on 22 May 2016 and reveal whether or not the actress had any visible injuries on her face.

Depp has denied the allegations that he had hit her and claimed that Heard used makeup to paint fake bruises.

“We are interested in James Franco and Elon Musk as fact witnesses because we have evidence they are men who saw Amber Heard’s face in the days and nights between when she claimed Mr. Depp smashed her in the face on May 21 and when she went to court withy painted on ‘bruises’ to obtain a Temporary Restraining Order on May 27”, Depp’s attorney Adam Waldman told The Blast.

Had a rough day? Here’s Amber Heard sneaking James Franco into an elevator when she was married to Johnny Depp. Hopefully this makes your day seem not so bad 👍🏼 pic.twitter.com/5B6aXRb0XI

Footage obtained by the media outlet shows Heard taking an elevator ride and retrieving a man who is alleged to be James Franco from downstairs. The two seem to be aware of the surveillance camera in the elevator, as Heard, who is covering her face with her hair, and cap-wearing Franco back into a corner with their heads down and away from the recording devices. At the end of the video, James is seen putting his head on Amber’s shoulder.

It is unclear how long Franco stayed with Heard inside the house, or the nature of their relationship.

Heard’s attorney Eric George told Fox News that his client and Franco used to live in the same apartment complex and were simply taking the elevator at the same time.

“This bogus story is just another lame attempt by Johnny Depp and his team to spread deliberately misleading information through the tabloid media so that he can continue to attack and abuse his ex-wife. Johnny Depp and his team have been trying – and failing – to place a salacious story based on this irrelevant footage for weeks. It’s pathetic”, he said.

The video has sent social media into a meltdown, with many users wondering why Franco hadn’t come forward to confirm whether Heard had injuries or not:

Let’s not talk about a affair the may or may not have happened. Let’s talk about the fact James Franco saw Amber Heard a day after she claims Johnny Depp attacked her, why hasn’t he come forward to confirm if she had injuries or not? Why wasn’t he on her witness list in 2016?

He's involved because 3 years ago he knew about the abuse allegations Heard was spreading around and could've cleared Johnny's name immediately because he was an eyewitness that she had NO INJURIES to her face. He chose not to and to leave Johnny out to dry. He's a real SCUZZBALL

Woah. That James Franco and Amber Heard penthouse elevator video @TheBlastNews posted is damning. For Amber. I always thought her story did not add up.

Many lashed out at Amber, calling her a liar:

Amber is a liar. You will see.

#JamesFranco witness the #amberheard s lies please . I used to love you and I'm your fan, I was shoked when i saw these news for the first time one-two months ago 😫😖💔#johnnydeppp #amberheardisanabuser

Depp and Heard met in 2009 while starring in the movie, “The Rum Diary”, and tied the knot in February 2015. The legal battle between them started after Amber claimed that Johnny beat her multiple times throughout their marriage. When their divorce was finalised in January 2017, both spouses signed a non-disclosure agreement barring them from discussing their relationship in public.

Despite their agreement, Heard wrote an op-ed for The Washington Post in 2018, in which she describes being a victim of domestic abuse. Although she didn’t mention Depp’s name in the article, his lawyers said that she was clearly referring to him.

Johnny has filed a $50 million defamation lawsuit against her, claiming that Heard insinuates he was the abuser and calls the allegations part of “an elaborate hoax to generate positive publicity” for her and promote her career.

In response, Heard came up with new accusations against her ex, claiming in court documents that he had choked her, hit her and ripped out her hair during one of his drug-fuelled rages.

The actress also alleged that Depp abused alcohol and drugs throughout their relationship and became a “totally different person, often delusional and violent”, who once threatened to “f*cking kill” her when she told him she was going to leave him.