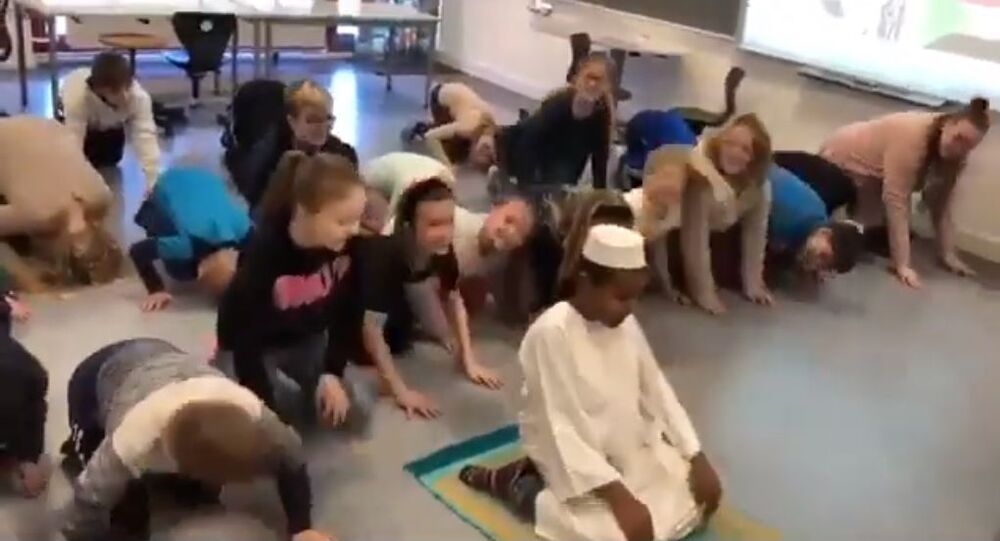 In the controversial video, pupils chant “Allahu Akbar” (“Allah is greater”) and kneel to the ground under the supervision of a female teacher who gives clear instructions about how this is done.

A video of Danish children being trained how to perform a Muslim prayer has gone viral in Denmark, triggering strong reactions from politicians and ordinary Danes.

In the video, a boy of African descent dressed in Muslim clothes demonstrates the Islamic prayer to a group of predominantly ethnically Danish peers. Then, he is interrupted by the teacher who instructs the kids to say “Allahu Akbar”, whereupon the entire class kneels in prayer.

While the video was not dated, Danish TV2 later found out that the prayer took place at Thyregod School in Velje municipality in southern Jutland in November 2018.

The video was not intended to reach the public light. A Sudanese mother of a third-grader filmed the group of pupils and their teacher, despite being specifically instructed not to do so, only to later upload it to the internet.

“She was explicitly told this was not allowed. If she were to take pictures, it should only be of her own son”, school principal Gert Hougaard told TV2.

On Document.dk, the website that discovered the video, and on social media, the reactions were devastating, with many calling for the teacher and the entire school leadership to resign.

“The teacher should be fired with a kick in the ass”, one reader suggested. “And if it doesn't happen, close down the school”, another chimed in.

Many labelled Thyregod School a “Quran school” and suggested it was “indoctrinating” Danish schoolchildren.

The Danish People's Party's Martin Henriksen, who has recently been appointed the head of the party's new committee to bolster its national conservative profile, sent a written request to the school, asking for an explanation why the children should be taught the religious ways of Islam. Henriksen is very dissatisfied with the answer he has received from headmaster Gert Hougaard.

“Hougaard has not responded whether he intends to pursue this practice, and he has referred to the curriculum on the subject of Christianity”, Henriksen told the news outlet Den Korte Avis. According to Henriksen, the education focuses on introducing the main ideas and basic concepts of religions in Denmark and across the world.

Henriksen wants to have an explanation from the school management whether they also intend to teach about Islam's “dark sides and widespread fundamentalism”, as well as massive religious and social control.

In conclusion, Henriksen also asked whether the school management had received the parents' consent for the Muslim prayer. The last question was whether the Muslim students are taught the Lord's Prayer.

The school itself has received many angry e-mails, headmaster Gert Hougaard admitted, saying he has “never experienced anything like this”.

According to him, the Muslim prayer occurred in connection with a thematic week called “Know your life”, during which the children were shown different ways of living. Hougaard explained that the teacher had his “full support”. The school board stressed it has full confidence in all the employees, yet suggested a tightening of filming regulations.