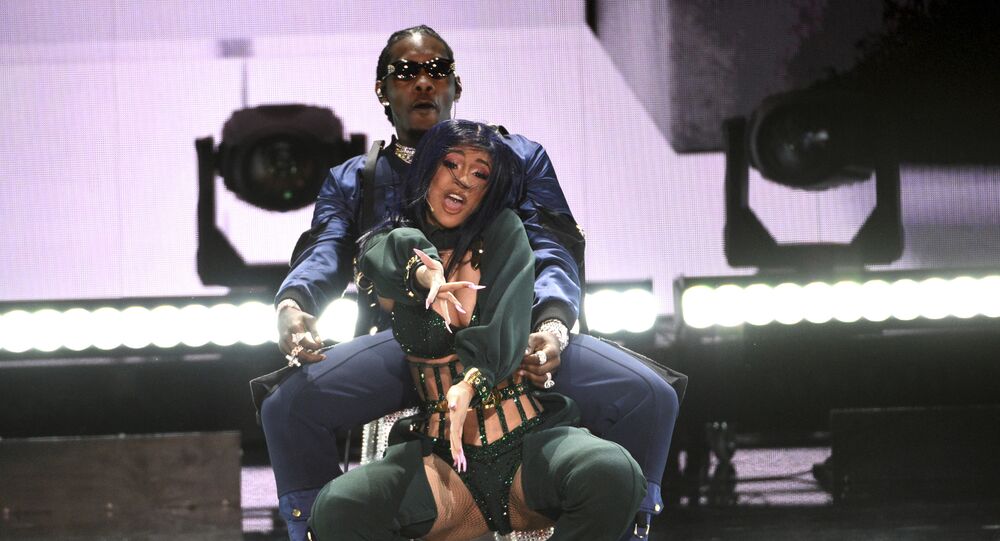 Power couple Cardi B and Offset opened the 2019 BET Awards at the Microsoft Theatre in Los Angeles on Sunday night - and they are definitely not afraid of a little PDA.

Cardi B brought the heat to the 2019 BET Awards when she gave her husband, rapper Offset, a seductive lap dance on stage while performing their collab, "Clout", and her phenomenal new single, "Press", on Sunday night.

The 26-year-old hip-hop queen, who has gone from being a stripper to making history at the Grammy Awards by becoming the first solo female to win best rap album for her debut album, "Invasion of Privacy", was wearing a skimpy emerald bodysuit and matching chaps, giving onlookers a closer look at her famous derriere.

While Cardi and her beau were seemingly in the mood for something a little more private, an army of dancers around them were performing perfectly coordinated moves in the midst of a cloud of smoke.

Lmao Offset when Cardi b gave him a lap dance on live tv #BETAwards pic.twitter.com/x5WOpCfCcM

Cardi B and Offset opening up with giving a lap dance to her baby daddy that was electric. #BETAwards

Me when @iamcardib started giving @OffsetYRN a lap dance live during the people #BETAwards2019 pic.twitter.com/sfxkOeWNNC

The couple appeared to be re-imagining their routine from the music video for "Clout", where Cardi gives the Migos rapper a very intimate lap dance and twerks, while Offset... is nonchalantly enjoying the act.

Cardi B spitting bars while giving her husband Offset a lap dance. What more can a guy ask for? 💃🔥
pic.twitter.com/4BzsNYTq5z

Cardi B has been open about her past as a stripper - a job she took at the age of 19. With her music career going strong, she's left exotic dancing behind.