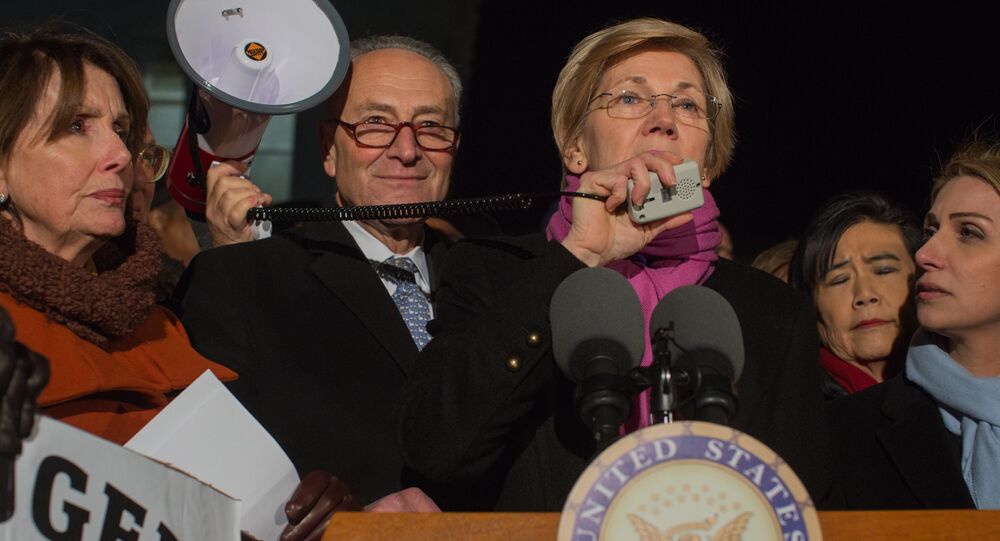 The flight was heading to Miami, where the first round of Democratic debates are slated to be held next week.

By a quirk of fate, fellow Senators and progressive rivals in the upcoming presidential election Bernie Sanders and Elizabeth Warren were spotted on the same aircraft on Thursday evening sitting one seat away from each other.

She’s His One Piece Of Carry-On: What Airport Ticket Agent Thought It Was A Good Idea To Put ⁦@ewarren⁩ Behind ⁦@SenSanders⁩ On Crowded Flight? #oldmanfarts #flighttohell https://t.co/eaD0gaiLnk

Sanders was seated mid-cabin in the economy section on a far left window seat and Warren occupied the same seat one row behind him, apparently immersed in reading. Sanders, in the photo, appears to be staring out the window.

According to the Hill's Steven Clemmons, who shared the photo of Thursday's flight on Friday, they were heading for Miami - where they will join a candidate forum ahead of the first Democratic debates next week, also to be held in Miami. The pair are also due to participate in a DNC convention in South Carolina this weekend.

The now viral image drew a variety of reactions online – from hilarious to straight-forward candidate endorsements:

She is always behind him; in policies and in the polls.

She's coming up with a plan... He's studying climate change!

One suggested what Warren was reading:

Another drew psychological parallels based on how the two candidates prefer to sit – with shade open or closed:

Bernie keeps the shade open so he can see the world; Warren shuts it out.

Taking a window seat and then pulling the shade is disqualifying.

Another dwelled on Warren, who focused her pre-election campaign on environmental issues, showcasing double standards, as she apparently chose to fly to her destination, along with her Democratic colleague:

If they truly cared about the environment they would not have flown.

Earlier this week, Sanders was alleged to have taken a dig at his Democratic colleague, reacting to a Politico report that assumed that centrists are “coming around” to her candidacy in the 2020 vote.

"The cat is out of the bag," Sanders tweeted, explaining at length:

"The corporate wing of the Democratic Party is publicly 'anybody but Bernie.' They know our progressive agenda of Medicare for All, breaking up big banks, taking on drug companies and raising wages is the real threat to the billionaire class.”

Sanders later denied that he was speaking about Warren, noting, however, that Warren’s campaign is gaining strength as many voters prefer to see “a woman elected.”

“That tweet was not about Elizabeth Warren at all. Not at all. Elizabeth is a friend of mine, and we’re going to run what I hope are issue-oriented campaigns," Sanders told CNN's Chris Cuomo on "Cuomo Primetime."

"This was, though, a very strong statement about a group called Third Way, and you know that Third Way is the corporatist wing of the Democratic Party," he added.