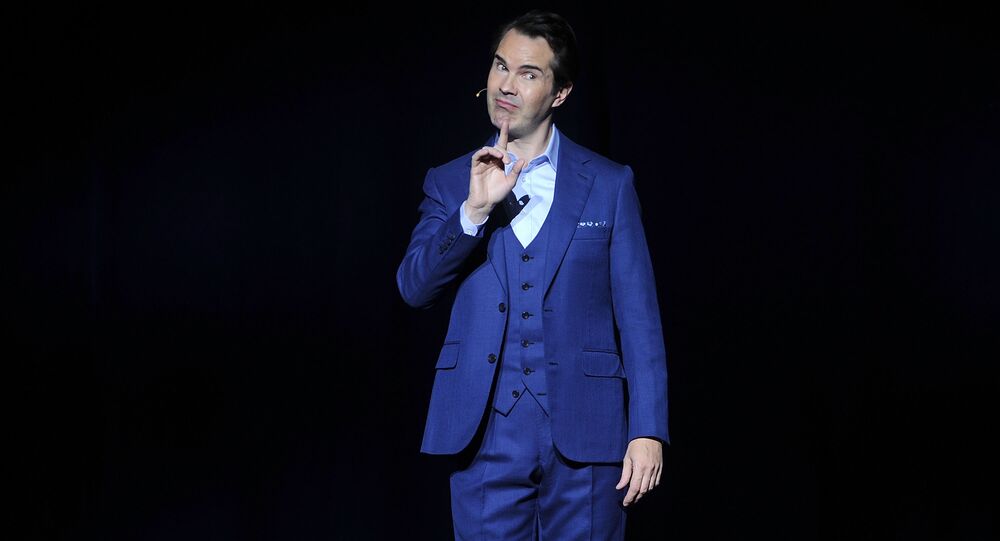 'Could Have Been Worse': Jimmy Carr Riles Up Social Media With Talk About BTS 'Exploding in America'

Facing mounting criticism from the outraged fans of BTS, the TV network that runs the show has issued an apology “to any who may have been offended” by the programme.

Popular stand-up comedian Jimmy Carr has managed to stir up quite a storm online with a couple of remarks he delivered earlier this week on Australian TV show “20 to One”, related to the famous K-pop boyband BTS.

During the programme, which was aired late on 19 June, the presenters described BTS as "the biggest band you've never heard of", before Carr stepped in to put his two cents in.

"When I first heard something Korean had exploded in America, I got worried. So I guess, could have been worse", Carr said. “But not much worse”.

This did not sit well with many of the band’s fans who went on to grill the comedian on social media.

Jimmy Carr has BEEN basing his “jokes” in racism and sexism.... about time we did something about that https://t.co/NOxfQlN9r5

I expected better from you but your disrespect to a group that you know nothing about was shameful and slandering.

You lost all your ARMY fans , i uses to like you , Bye

Some also directed their criticism at the Nine Network which runs the show, calling them out over alleged xenophobia.

Dear Western media, especially Australia’s @Channel9
- stop comparing groups & artists to Western ones. BTS is not the Korean 1D
- Immediately disregarding non-English acts is xenophobic in nature
- Mocking something because you’re ignorant just makes you look like an asshole

I don't think an apology would be enough after slandering BTS & Army. They should at least report in detail about the UN speech & the Campaign, how much BTS helped & donated+ about army projects etc. to show gp the truth about BTS.#Channel9Apologize @Channel9 @BTS_twt #ARMY

A number of netizens argued, however, that it was merely a joke, and so there’s nothing to apologise for.

thats actually kinda funny. man id hate to have to try to be a comedian these days. no one can take a joke anymore.

People who were offended by that joke by Jimmy Carr they need to toughen up.

It's not racist you plebs.... it's called comedy. Australians ! Doh !

It's a stupid joke but it's not racist. It's not as though there aren't escalated US/NK tensions at the moment.

You can actually walk the cat backwards on this particular joke, people. It's pulled straight from the headlines. Like most lazy jokes.

According to CNN, the Nine Network has issued an apology “to any who may have been offended” by the programme.

"As a light-hearted entertainment program, it is our belief that last night's episode of '20 to One' ... did not breach any broadcast regulations, and was intended to humorously highlight the popularity of the group", a spokesperson for the network said.

This week, the South China Morning Post revealed that BTS ended up selling over 600,000 tickets for its extended world tour, which earned the band about $79 million.

And in April, the band broke YouTube’s one-day viewing record, notching 78 million views for their collaboration with Halsey and 2 million comments.