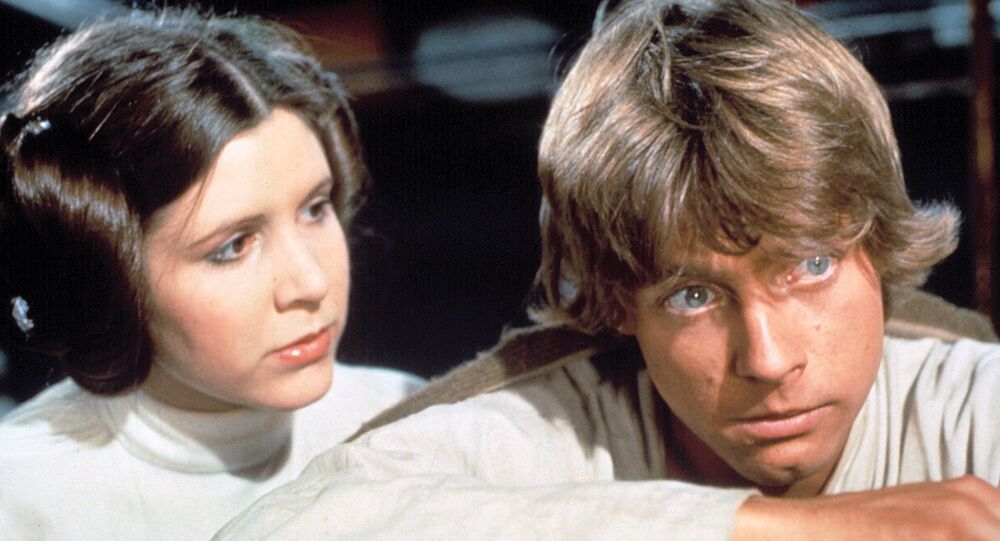 “Star Wars” took on a new meaning Wednesday as the actor who portrayed Luke Skywalker started a social media campaign to get US President Donald Trump’s Hollywood Walk of Fame star removed and replaced with a new slab dedicated to his late co-star, Carrie Fisher.

Trump’s star on the Hollywood Walk of Fame has been defaced with swastikas and profanity, pulverized by a pickaxe and has also served as the site of multiple brawls and demonstrations.

The star has already been renamed once to call the US president “Putin’s b***h,” and on Wednesday, “Star Wars” actor Mark Hamill took to Twitter to propose an official replacement for the notorious brass-rimmed star: one for Fisher, who played Princess Leia in the “Star Wars” films. The famed actress died in 2016.

Good riddance! (and I know just who should replace him....)#AStarForCarrie ⭐️ https://t.co/DF53fOxshK

Though the West Hollywood City Council’s proposal to remove the star did not make it past the Hollywood Chamber of Commerce a year ago, Hamill’s “#AStarForCarrie” tweet brought the contentious plaque back into the forefront and was well-received by Twitter users who either expressed their admiration for Fisher or their dislike for the US president.

I actually saw someone walking up Hollywood Boulevard campaigning for #AStarForCarrie a few weeks ago. Pretty neat. pic.twitter.com/bDg0wlbKLg

YES!! GIVE CARRIE HER STAR ALREADY

I can think of no one more deserving than one of the stars of Hollywood’s First Franchise and one of its all time best script doctors. She was a gift. #AStarForCarrie

i remember trump mostly for his role in Starwars pic.twitter.com/NZzT1NtL6w

@HamillHimself maybe if you appeal to the Twitterverse to get #AStarForCarrie trending we can all make it happen! pic.twitter.com/46xbl5C7uT

"I don’t hate hardly ever, and when I love, I love for miles and miles. A love so big it should either be outlawed or it should have a capital and its own currency."

I don't hate hardly ever either. But I agree his star should be replaced with #AStarForCarrie pic.twitter.com/o9FtBHxlGe

carrie fisher was one of the brightest stars and we didn’t deserve her. she deserves a star on the hollywood walk of fame more than anyone else ever #AStarForCarrie pic.twitter.com/OViP4lB0bB

#AStarForCarrie was born after people discovered that Carrie Fisher didn’t have her own Hollywood Walk of Fame star. https://t.co/J5VvkGhtx3

Trump was awarded the star back in 2007 to honor his work as a producer of the Miss Universe pageant. Though there have been concerted efforts and proposals to get him off the Hollywood Walk of Fame since he was elected president, the Hollywood Chamber of Commerce and Los Angeles Mayor Eric Garcetti have both stood in the way.

"Once a star has been added to the Walk, it is considered a part of the historic fabric of the Hollywood Walk of Fame. Because of this, we have never removed a star from the Walk," Leron Gubler, president of the chamber, said in a statement reported by Sputnik. He has maintained that stance since 2016.

Additionally, Garcetti spoke to TMZ in 2018 and scolded those making the star a site of so-called resistance, saying that “we should be focused less on sidewalk brawls and more on replacing a Congress that enables him.”

Though it’s unlikely the Chamber of Commerce and Garcetti will budge on the issue, that does not mean Fisher cannot receive her own posthumous star in a different spot on the famed sidewalk. In fact, some Twitter users, such as @kaldannan would prefer a separate location, saying Trump’s slot on the Walk of Fame is “tainted.”