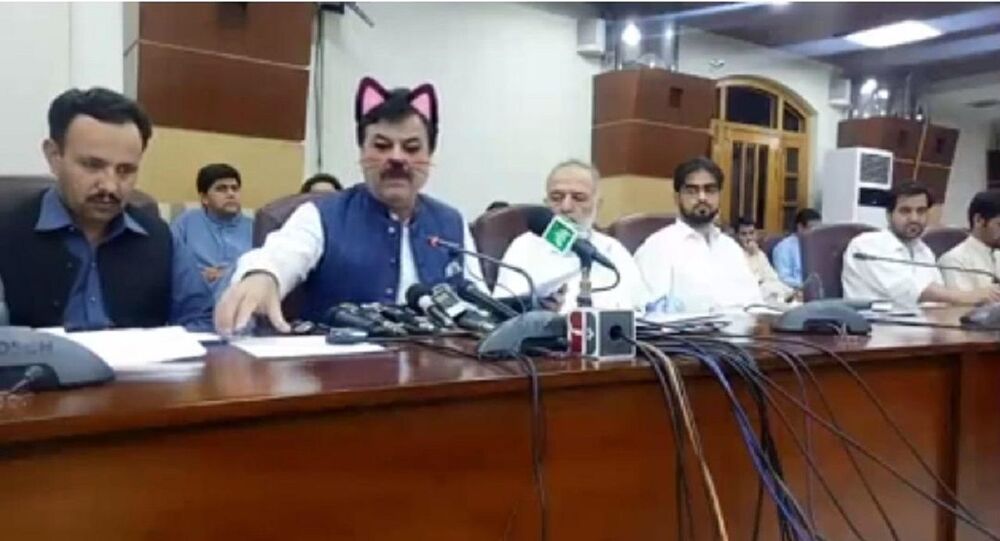 Local officials later clarified that the official press conference’s online translation had been "augmented" with filters due to a "human error".

The administrators of the official Facebook page for the Pakistani party Tehreek-e-Insaf (PTI), governing the province of Khyber Pakhtunkhwa, have managed to turn a regular local government presser into a source of unstoppable laughter as they live streamed the event with a "cat filter" on, a journalist from Associated Reporters Abroad reported, posting screenshots. As a result, the deadpan face of local Minister for Health and Information Shaukat Ali Yousafzai was "cheered up" with a cat "mask".

Local officials later clarified that the filter was enabled due to a "human error by one hard working volunteer" and added that measures have been taken to avoid such mistakes in the future.

The sight of the minister and his colleagues' faces altered by the filter sent many netizens into fits of non-stop laughter over the whole situation. The video of the stream, published on the Facebook page of ruling party Tehreek-e-Insaf (PTI), has since been deleted.

Some noted that the filter had turned Shaukat Ali Yousafzai into the "cutest politician" ever.

If Imran is the most handsome
He is the cutest.. 😆
Kisi ki Nazar na Lage.. pic.twitter.com/Na24Mh3k9H

Several social media users suggested that masks had been used to attract the younger generation to pay more attention to local politics.

Others believed it was a mistake by the staff working on the content for the province's official Facebook page.

I am baffled by the quality of “Stuff” 🚬 available in Pakistan. I’m sure it’s better then “malana cream”.