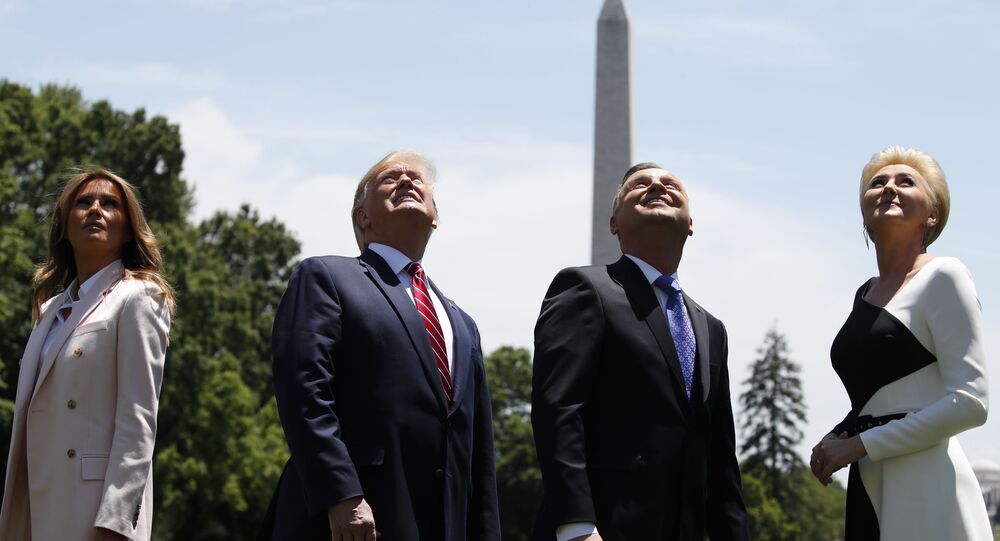 In honor of Polish President Andrezej Duda’s visit to the White House and agreement to purchase up to 35 F-35A fighter jets, US President Donald Trump and his administration scheduled a flyover to show off the jet in action. The memo regarding said show, however, was clearly not received by all residents in Washington, DC – causing some to panic.

On Wednesday, Trump announced that in addition to the US deploying up to 2,000 troops to Poland (a 1,000-servicemember increase from previous reports), Warsaw had also inked a deal to purchase "32 or 35 brand new F-35s at the highest level” from Washington.

"At 1:55 to 2:00, we are going to have two super F-35s ... put on a very small show for us, and we are doing that because Poland has [ordered] 32 or 35 brand new F-35s at the highest level," Trump told reporters during his Wednesday afternoon meeting with his Polish counterpart.

Despite his claim, only one Marine Corps F-35 fighter showed up.

Also, Trump’s brief advisory did not really reach everyone in the DC area. As a result, the F-35B Lightning II (whose 92 decibel flyover is approximately four times the strength of lawnmower) took many uninformed individuals in the nation’s capital by surprise.

WTH was that noise just now in downtown DC?!?!😳 It sounded like a jet flying RIGHT over our 13-story building on K Street. @capitalweather, did you hear it?

Seriously loud aircraft just flew over the building in DC (Chinatown) - seemed very low and was extremely fast and loud. Anyone else hear this?

Anyone just hear something super loud over downtown DC?

With no planes typically allowed over #DC airspace, this was terrifying to hear and feel fighter jets flying over K Street😱😱 https://t.co/hOfSQfJqKf

There is an #F35 stealth fighter flying around downtown DC right now...

Jets flying over #DC in the middle of the day is frightening pic.twitter.com/FWPp0PbhiZ

Many netizens in the DC area were able to capture the spectacle on their smartphones.

This jetfighter was flying really over #DC just near the #WhiteHouse pic.twitter.com/ULoAuZ3epA

Pardon our noise - it’s the sound of America being awesome @thef35 #flyover #f35flyover greatest thing to see over #DC pic.twitter.com/E3DvWvOyEd

There it is...the F-35 fighter jet coming up over the West Wing, heading north over Washington DC. Very loud and low pic.twitter.com/pnJlHZdqCK

From the rooftop of the Kennedy Center... pic.twitter.com/VICqSkSELu

The sound of fighter jets over the White House was scary for a minute, until someone at the office noted it was a prescheduled Trump stunt. I should read the news more regularly... #F35pic.twitter.com/jjta4sk0xT

Some others who quickly learned or were previously informed about the flyover either voiced their disagreement with commander-in-chief’s military flex or used it as time to troll Trump, who had previously (falsely) claimed “you literally can't see” the fighter jet.

The airspace over the nation's capital is now reserved for sales demonstrations by defense contractors. Sounds about right. https://t.co/NeTsJKfPaQ

That sound you hear in DC is $1 trillion+ that could go toward helping those in need https://t.co/0ysxJF7niF

You might live in DC when you hear (but can’t see) a jet flyover the middle of the District and immediately check all your social media outlets to see what is happening. No worries. Just the dude down the street having the “greatest fighter jet” visit today. 😳