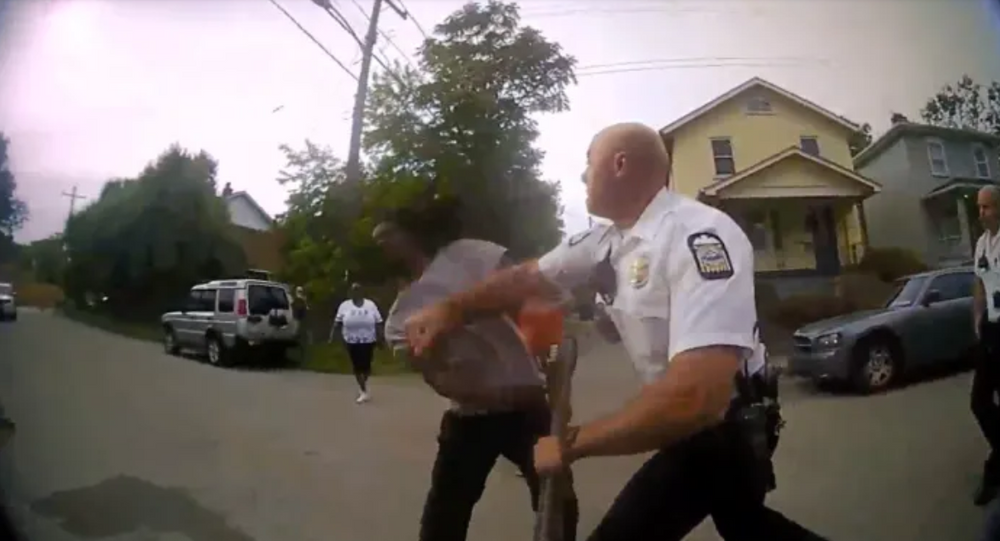 The Columbus Police Department has released body camera footage of an officer pushing and then punching a man during a police investigation, once again raising questions about police brutality.

​Footage of the incident captured by Deborah Johnson shows her daughter-in-law attempting to enter a home being searched by officers with her two kids, when a police officer gets in her way. When her husband Jonathan Robinson intervenes and refuses to comply with police instructions to stay back, officer Anthony L. Johnson pushes Robinson with his left hand.

“Get the f**k off me,” Jonathan is heard saying, moments before Johnson punches Jonathan in the left side of his face. Robinson was then thrown to the ground and arrested, according to the Columbus Dispatch.

“With you approaching my wife with your gun not holstered, and not only is it not holstered, but your finger is on the trigger, I’m not thinking you’re coming to help her, serve or protect her,” Jonathan told ABC6 of his mindset during the incident.

In a Facebook video, Jonathan’s brother, Derryle Sloan, says that one of the officers gave permission for a relative to pick up children inside the home during the police investigation. However, that information was not conveyed to other officers at the scene.

“He [Johnson] sucker-punched my brother,” Sloan said. “And he laughed about it.”

Johnson, who is known as Columbus’ “dancing cop,” went viral in 2015 after a video of him showing off his dance moves to a group of kids went viral. On his Instagram page, he has hundreds of videos of him dancing, joking and giving advice to local teens. His biography on his page states, “I grew up hating the police ... now I’m a Police Officer. “I grew up in the same streets I now protect.”

The Columbus Division of Police said it is investigating the incident. On Saturday, the department’s chief, Thoman Quinlan, reviewed the footage and said he believed Johnson acted to protect bystanders.

“While uses of force can appear shocking, the officer on preliminary review was protecting bystanders during a call for service where guns were fired. Full investigation to follow. Be patient,” the department said in a tweet on June 8.

WATCH: US Cops Under Investigation Over Excessive Force Allegations