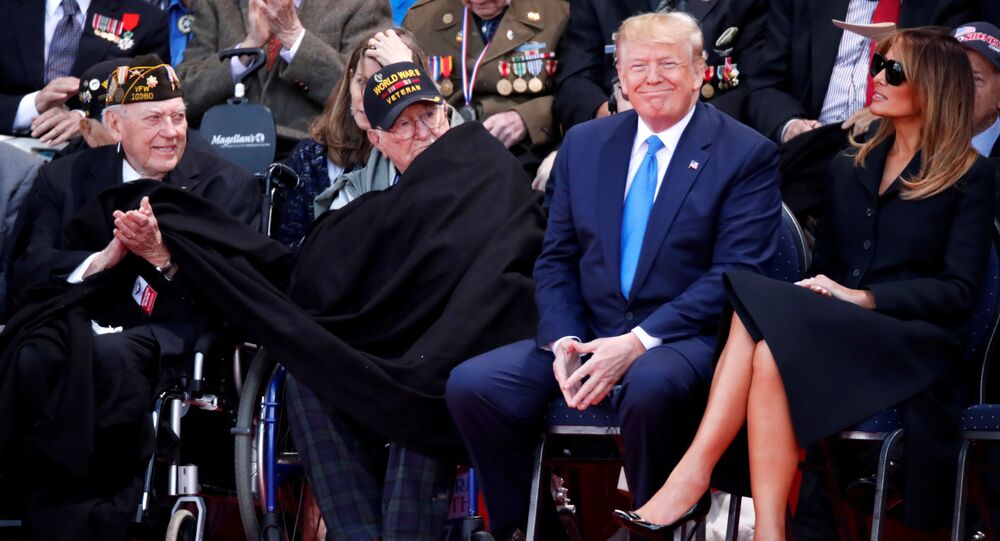 The theory about the US first lady sending a look-alike to parade alongside her husband at different events has been surfacing now and then. The photos and videos of Melania Trump’s visit to the Normandy American Cemetery have renewed these speculations.

Some commenters have claimed that Melania Trump’s doppelganger accompanied the US president during the D-Day commemorations instead of the actual first lady after photos and footage of their French trip emerged online. In the clip, the Trumps are seen visiting the Normandy American Cemetery with French President Emmanuel Macron and his wife Brigitte to pay respects to the US soldiers, killed in World War II and buried there.

The video shows Melania in black glasses, dressed in black, going along crosses with her husband and carrying white flowers. She then kneels and puts them in front of one of the graves.

Her outfit and body language has raised suspicions among some netizens, who reinvigorated an old conspiracy about secret agents posing as the first lady during some events. They shared their doubts on Twitter.

Malaria's double? Is that why French First Lady is keeping her distance, or is she just disgusted?

That's not Melania. Look at the smile. It's her double.

That’s the secret service agent posing as @FLOTUS
Anytime you see her wearing glasses it’s the body double. You can also notice how Trump is super handsy with her like never is with Melania.

​One user supported this commentator.

That and he isn’t making her stand waaaay behind him.

​Other photos from the US president’s international tour made commenters’ imaginations take flight.

#fakemelania In an effort to save face, has Donald employed a body double to stand in as Melania?
The new Melania will hold Donald’s hand in public for everyone to see, never takes off her dark glasses and has smaller boobs.

But is it really @MELANIATRUMP @FLOTUS or has @realDonaldTrump @POTUS brought the stand in again? Also, might I suggest if he break Royal Protocol again, Her Majesty makes it known she's offended by him.

in her outfit defense, we all know "off-the-plane-photo-op-Melania" is a body double, so I can't really shame her on an outfit she probs didn't wear

​The body double conspiracy theory is far from being new: it virtually dates back to October 2017, when actor and comedian Andrea Wagner Barton suggested a body double had replaced her for a public appearance. While many argued the woman’s facial features are far different from Melania’s, all the rest eagerly speculated on the potential security reasons for the alleged decision to pick a body double.