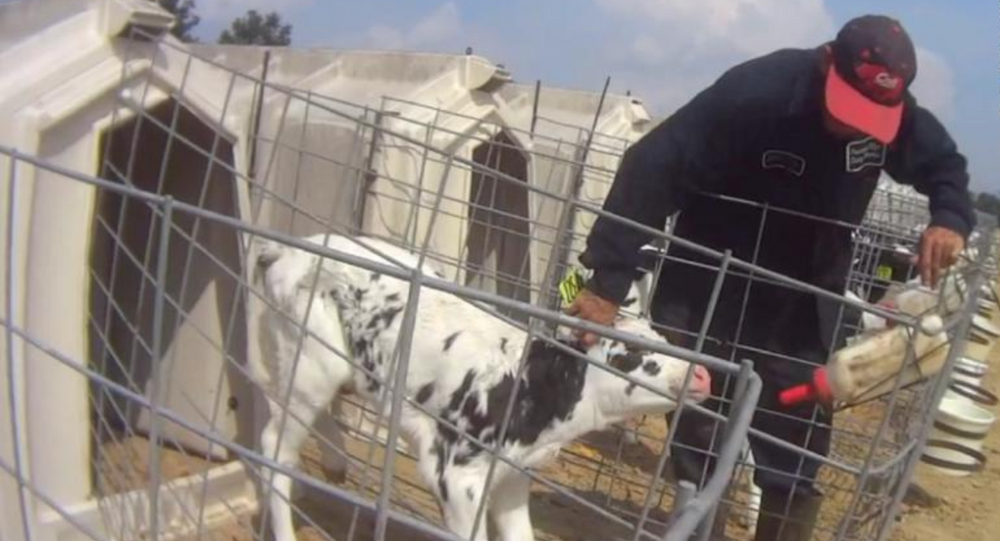 According to its website, Fair Oaks Farms is "recognized as the #1 agritourism destination in the Midwest." The company invited visitors to the site to explore its dairy farms for a "fun-filled look at the life of a cow."

​"No one cares for the land, animals, and the safety and affordability of the food they produce as much as a farmer," the website adds.

However, this week, a member of investigative animal welfare organization Animal Recovery Mission (ARM) released video they had taken while working at Fair Oaks Farms between August and November of last year and secretly documenting its abuses.

The disturbing footage shows employees kicking, slamming and dragging calves by their ears. The video also depicts employees hitting calves with steel rebars, branding irons and milk bottles. The calves are also witnessed being thrown into isolation hutches in filthy conditions. The employees are even seen sitting on the calves and violently force-feeding them.

"I am disgusted by and take full responsibility for the actions seen in the footage, as it goes against everything that we stand for in regards to responsible cow care and comfort. The employees featured in the video exercised a complete and total disregard for the documented training that all employees go through to ensure the comfort, safety and well-being of our animals," Fair Oaks founder Mike McCloskey stated in a video this week.

According to McCloskey, after closely reviewing the video, five individuals were identified as committing "multiple instances of animal cruelty and despicable judgment."

"Of the five, four were our employees and one was a third-party truck driver who was picking up calves. Of the four who were our employees, three had already been terminated prior to us being made aware months ago of the undercover ARM operation, as they were identified by their coworkers as being abusive of our animals and reported to management. So, in this instance our policy of cow care training — ‘see something, say something' — worked. After reviewing the video frame-by-frame, those three employees are responsible for the overwhelming majority of offenses seen in this video," he added.

However, the fourth employee's animal abuse was not uncovered until the release of the undercover footage. That employee has since been terminated, according to McCloskey. In addition, Fair Oaks Farms promised to ensure that the individual who worked for the transportation company would not be allowed on its farms again.

Following the release of the video, several grocery store chains, including Jewel-Osco, Family Express and Tony's Fresh Market, removed products by Fairlife — a company McCloskey owns that sells dairy made by the farm — from their shelves.

"At Jewel-Osco we strive to maintain high animal welfare standards across all areas of our business, and work in partnership with our vendors to ensure those standards are upheld," a spokesperson for the company said in a statement obtained by multiple reports. The supermarket chain has 187 stores across northern, central and western Illinois, eastern Iowa and parts of northwest Indiana.

In its video, ARM also alleged that marijuana plants are being grown on the farm property and that employees smoked marijuana, snorted cocaine and sold drugs while on the Fair Oaks Farm property.

In his statement, McCloskey denied the allegations that employees grow and sell drugs on the farm, stating that the plants in the video are an "invasive perennial species that is rampant on farms all over the Midwest." However, he added that he is "disappointed to learn of potential drug use" on the property.

Farm Worker Down Under Charged For Sticking Needles in Strawberries (PHOTOS)