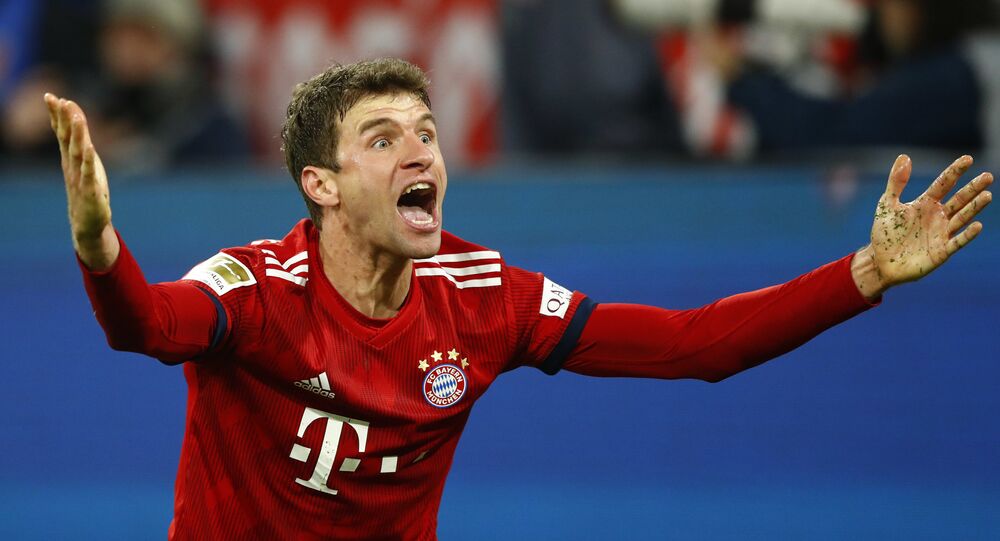 New Delhi (Sputnik): As India begins its Cricket World Cup 2019 campaign, German footballer and 2014 World Cup winner Thomas Mueller has voiced support for the Indian team and its captain Virat Kohli. Kohli is a supporter of the Deutscher Fußball-Bund (DFB). In his social post, he was seen wearing a jersey with "INDIA' on it, and a cricket bat in hand.

I wish all participants of the Cricket #WorldCup2019 good luck & thrilling matches. Especially I cross my fingers for @imVkohli, the captain of the Indian team. He`s a fan of @DFB_Team and supported it multiple times in the past 🏏✊😃 #Cricket #GermanyCheersForIndia #esmuellert pic.twitter.com/hwS4apAlIE

The Twitterati have rejoiced over Thomas Mueller's support for India.

For cricket commentator Harsha Bhogle, this was "some" news.

What news to start the World Cup! The Germans are cheering for #India. Hey @imVkohli you have a new set of fans cheering the team. Go #TeamIndia, make us all proud. #Cricket #WorldCup2019 #GermanyCheersForIndia @VolkswagenIndia @esmuellert_ https://t.co/QAH4HU0jwT

​A Bayern Munich fan taking a cue from Mueller in supporting India, told India not to let "those dirty English hands touch the beautiful WC trophy as Germans have been doing with FIFA WC since 1966".

So goes my support to Indian team now 🙏

Mueller's tweet has made him this social media user's favourite German footballer.

Other Indian fans thanked the German footballer for his support.

You have won a billion hearts of India with this one strike! @esmuellert_ 👏#GermanyCheersForIndia https://t.co/25Yd4yd8as

Thank you @esmuellert_ Great Sport you are. Thanks for supporting India this World Cup. Dankeschön!!#GermanyCheersForIndia #WorldCup2019 https://t.co/hZp7f3FUDN

After Thomas Mueller wishing best for #teamindia it's been a treat for a fan like me.

The Cricket World Cup is organised every four years by the International Cricket Council (ICC). The 2019 event is 12th edition of the Cricket World Cup and is being organised in England and Wales. It began on 30 May and will culminate on 14 July 2019. The Indian team has won the world cup twice, first in 1983 by defeating the West Indies and second by beating Sri Lanka on home ground in 2011.