‘He Makes His Own Rules’: Trump Patting Queen on the Shoulder Inflames Twitter

The incident came after Trump gave kudos to the Queen last night, praising her as a “great, great woman” who he said “has embodied the spirit of dignity, duty, and patriotism that beats proudly in every British heart”.

Donald Trump has broken protocol during a meeting with the Queen by appearing to pat her on the shoulder when Her Majesty stood up with a glass of Windsor Great Park sparkling English wine to toast the US President.

According to UK royal protocol, touching the Queen, especially in such a formal setting, is considered extremely gauche behaviour.

Notably, Her Majesty did not react to Trump’s gesture and continued to play hostess as if nothing has taken place. However, this was not the case with many netizens, who quickly posted sarcastic tweets to quip at what they described as Trump’s “inappropriate” and “mannerless” behaviour.

Are you supposed to pat the Queen, Mr. President? pic.twitter.com/9UyNEc2ZuA

As an American, damn you trump. Don’t touch my queen!

That's our Trumpster, breaking rules all over the place. Who really gives a………….(please yourself as to what word you want to use).

He only meant well

Lol…. the man can't spell protocol least of all comprehend it! pic.twitter.com/ZSmCdclJn7

He has no idea of what protocol is. I’m surprised she didn’t shutter in fear.

He thinks he’s above a Queen.

My apologies to our esteemed UK allies that Her Majesty must tolerate our mannerless #BuffoonInChief. But please don't blame all of us, I voted for @HillaryClinton. Wish us luck in #Election2020, as I wish you luck for the successor to PM Theresa May.🇬🇧🇺🇸 pic.twitter.com/7ehrH2ig8P

Donald Trump makes his own rules.

I knew it was not appropriate, and I believe he realized quickly. He always does that, though. It's hard to break a habit. I think she forgave him.

He is not the first official to break the protocol,is he?

Commenting on the incident, one user claimed that “Donald Trump makes his own rules”, while another sarcastically noted that the US President “only meant well”.

It is worth noting that the lapse of protocol took place after Trump delivered a speech heaping praise on the Queen, who “has stood as a constant symbol of these priceless traditions from the Second World War to today”. 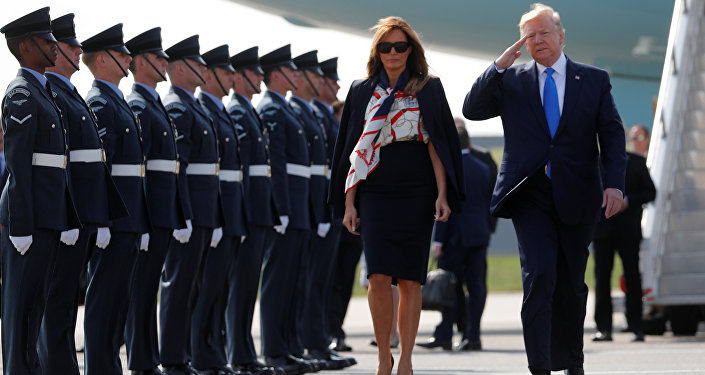 © REUTERS / Carlos Barria
Trump 'Endorsement' of Future UK PM Could Be Issue in Practical Terms - Scholar
Touting her as a “great, great woman”, Trump offered a toast to “the eternal friendship of our people, the vitality of our nations and to the long cherished and truly remarkable reign of Her Majesty the Queen”.

Trump and First Lady Melania Trump arrived at London's Stansted Airport on Monday morning, in what became his first three-day state visit to the UK. On the first day, Trump’s schedule included meeting the Queen, visiting Westminster Abbey and attending a dinner hosted in Buckingham Palace.