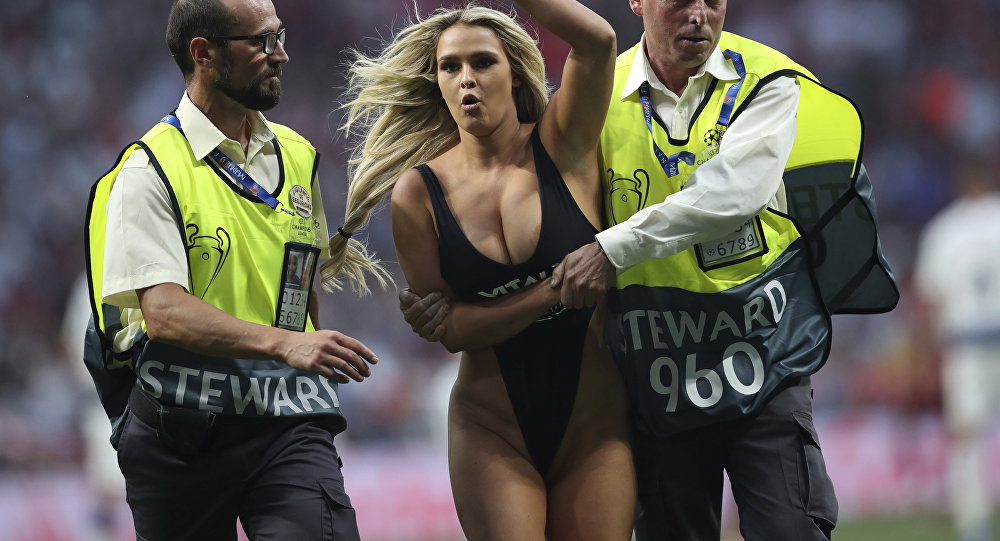 Kinsey Wolanski, who invaded the pitch in a skimpy black swimsuit during the Champions League final, told her Twitter subscribers that her Instagram now appears to have been hacked.

Halfway through the first half, a curvaceous female trespasser invaded the Wanda Metropolitano pitch to interrupt the game for a minute, wearing nothing but a black swimsuit promoting an X-rated YouTube channel and attracting the attention of millions of viewers – both football fans and followers of her and her boyfriend’s Instagram accounts.

Wolanski’s eye-catching intrusion on the action of football’s biggest club game saw her Instagram following skyrocket by well over 1 million in the hours after the stunt.

However, her account is now inaccessible, with anyone attempting to find some of the 22-year-old blonde stunner’s previous snaps being met with the message: "This photo or video has been removed from Instagram." Wolanski wrote on twitter that her account was hacked.

She went on to post short videos of herself hitting the treadmill in an attempt to "run off" the stress, as well explaining that she would be using Twitter to share her news for the time being.

"When you grow to 2.5m followers over night and then your account gets hacked…… just run it off kins. This is an emotional roller coaster," she wrote.

When you grow to 2.5m followers over night and then your account gets hacked…… just run it off kins. This is an emotional roller coaster 😂 pic.twitter.com/abZ2vW0zTT

Her boyfriend, Vitaly Zdorovetskiy, who now has more than 2.5 million followers on Instagram, remains unblocked. Zdorovetskiy himself staged a pitch invasion at the World Cup final in Brazil in 2014 — and claimed he had been forced to enter the stadium in Madrid on Saturday incognito. After his girlfriend’s stunt he vowed to marry her.