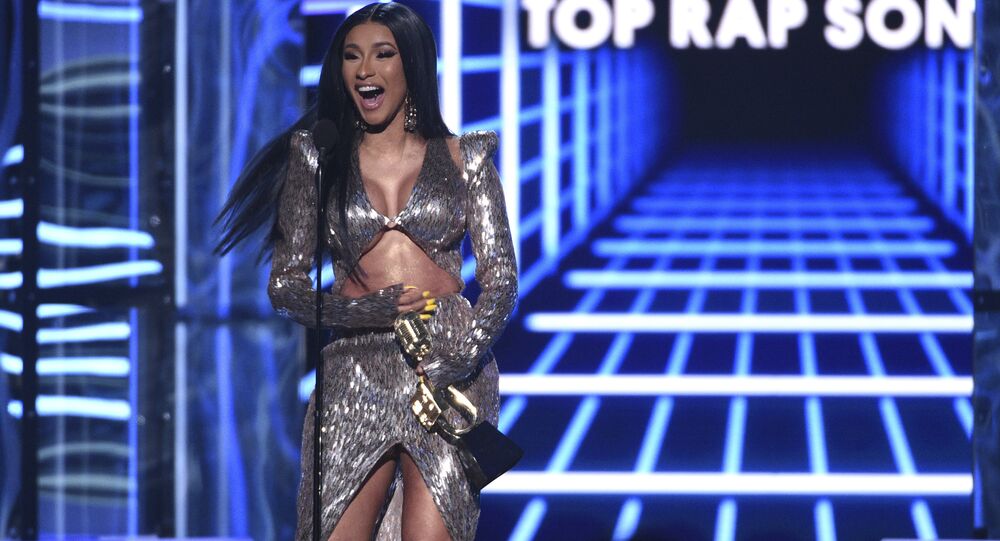 Grammy-winning rapper Cardi B may claim that she doesn’t “need more press”, but the X-rated cover of her new single is undoubtedly giving her some.

Cardi B has once again made international headlines after sharing a series of explicit black-and-white promo shots for her new in-your-face single, “Press”, in which she somewhat aggressively raps about excessive attention from the media.

Glammed up, the provocative rapper posed completely naked and handcuffed while being escorted into a courtroom as she’s being swarmed by a crowd of photographers.

PRESS IS OUT NOW ON ALL PLATFORMS! Thanks for the love ❤️

In the refrain, the controversy-sparking star, who won a Grammy award for her album “Invasion of Privacy”, hits back at the media, declaring, “Cardi don’t [sic] need more press”.

In another promo snap, Cardi is seen grinning and holding her cuffed wrists up to her neck, in a reference to female serial killer Aileen Wuornos, whose photo she previously shared on Twitter.

PRESS SINGLE AND OFFICIAL ART WORK DROPS THIS WEEK ON 5/31!!!

Even though Cardi used her killer curves to promote her explosive single, she is now recovering from recent cosmetic surgery procedures because certain complications forced her to cancel or postpone a bunch of shows.

She revealed earlier this month that she had undergone breast augmentation and liposuction after giving birth to daughter Kulture last July. But instead of taking the time necessary to fully recover, she decided to continue her tour as scheduled.

A few days ago, she went live on Instagram to explain why she decided to undergo those surgeries and admitted to losing a “lot of money” due to a string of cancelled performances.

“I do whatever the f*ck I want to do with my body. I don’t have the time of day like you do. My job as an entertainer is a 24-hour job, bro. So no I don’t have time to work out. I wanted specific things that I know no matter how much I work put won’t get fixed. So you know, you still got stitches in the inside – in my breast – so they slowly got to heal”.

Cardi B made history in February by becoming the first female solo act to win a Grammy award for Best Rap Album for her 2018 masterpiece “Invasion of Privacy”. Aside from that, she has fetched three American Music Awards, three MTV Video Music Awards, nine BET Hip Hop Awards and seven Billboard Music Awards, among other honours.

READ MORE: YouTuber Seeks $1m in Countersuit Against Cardi B Amid Defamation Row

On top of that, the 26-year-old rapper also holds two Guinness World Records – for most simultaneous Billboard US Hot 100 entries by a female artist and most simultaneous Billboard US Hot R&B/Hip Hop Top 10 entries by a female artist – shattering previous corresponding records held by none other than Beyonce.