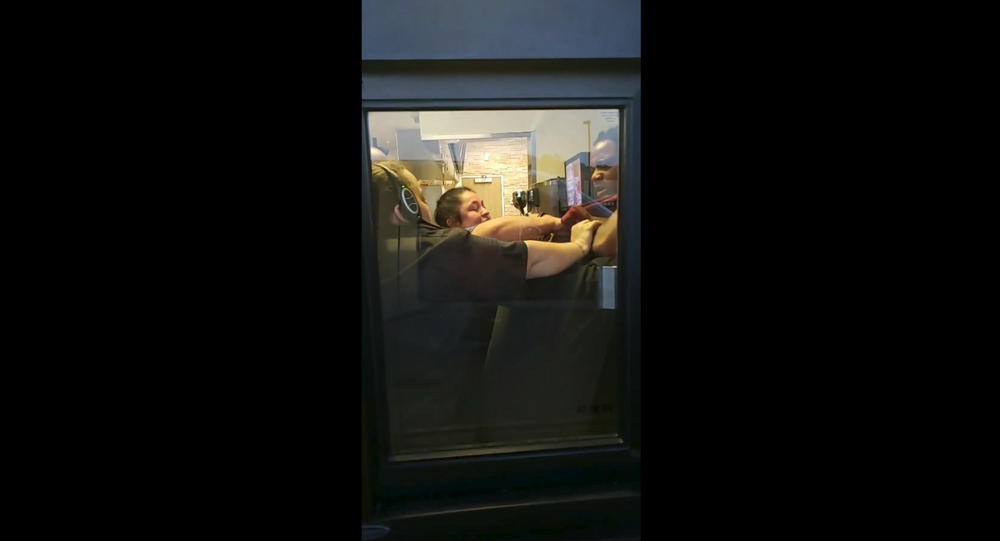 Rebecca Ramsey was patiently waiting in the drive-thru line of a North Carolina Burger King restaurant to pick up her ice cream order over the weekend when she received an unexpected taste of a "Jerry Springer"-esque brawl between employees.

Cellphone footage captured by Ramsey begins mid-fight, with an employee in a black shirt being forcefully pushed against the drive-thru window by a fellow worker in a red shirt. The pair repeatedly push one another in the confined space as fellow employees attempt to de-escalate the situation.

"Fighting in the Burger King," Ramsey tells viewers after honking her horn three times. "Y'all see all this s**t."

Although the not-so-dynamic-duo are eventually separated after a third individual comes onto the scene, that isn't enough to squash the beef. Video shows the black-shirted employee still in a fit of rage, angrily throwing kitchenware in the direction of his opponent. He's later allowed to leave the kitchen area after appearing to calm down.

At one point in the recording, a female employee lashes out at Ramsey after realizing that the customer had been recording the violent encounter. "Why the f**k you recording this s**t, b***h?" the wide-eyed woman yells out. That employee later walks away toward the dining area.

The video ends with Ramsey saying, "We ain't getting ice cream from here."

Ramsey told local news station Fox 46 that she believed the Sunday altercation resulted from the red-shirted employee scolding his fellow worker for not being respectful to another customer inside the eatery.

"The older man in the red shirt tells the younger guy, 'You're not going to disrespect women. I don't care if she's a customer or not,' starts cussing at him, [and] they start having words," Ramsey recalled. "And I just felt like something was going to happen, [so] that's when I took out my phone."

Leaving the restaurant without the ice cream order she intended to give to her son, the pair drove to a nearby Dairy Queen to get their sugary fix. To Ramsey's surprise, after picking up the sweet, they noticed that a second fight had broken out in the Burger King's parking lot.

It's unclear if the second altercation was related to the filmed brawl or if any charges have been filed in the matter. The "Be Your Way" hamburger restaurant said in a statement that all individuals involved in the Sunday scuffle were booted, and that all employees have since been ordered to complete a new round of guest experience training.

Bagley had been wanted in connection to an April 2 incident in which she and her girlfriend had reportedly tried to rob a Miami-Dade Burger King because employees refused to give them free french fries. Video of that altercation shows the pair fighting with workers in the kitchen area before knocking a cash register to the ground.

Bagley is being held without bond, and her partner has not yet been apprehended.