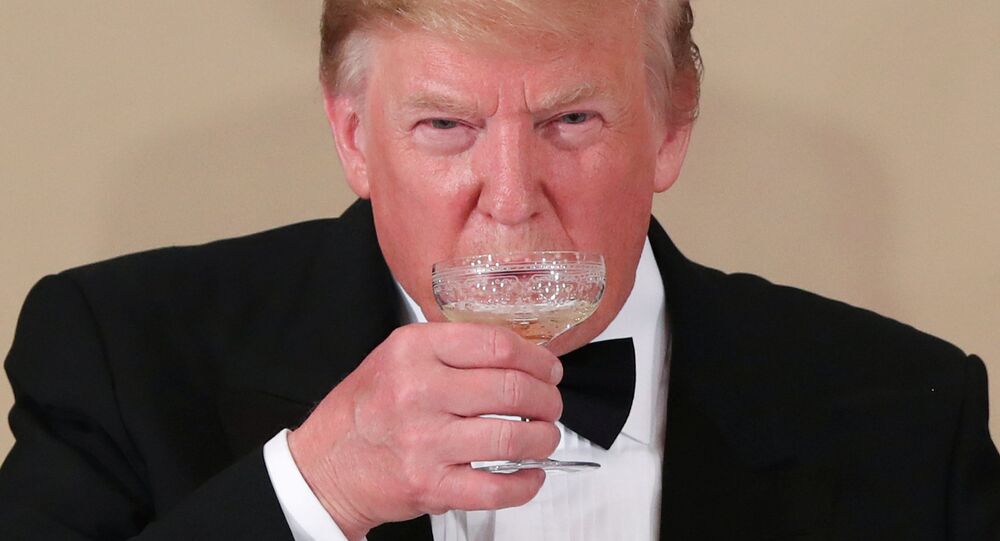 When in Rome: Teetotaler Trump Gets Toasted With 'Champagne' in Japan

As he refrains from consuming alcohol, Donald Trump usually gets served beverages such as Diet Coke or grape juice instead of wine and champagne.

US President Donald Trump was apparently in for quite an ordeal while attending a six-course state banquet at the Imperial Palace in Tokyo when he was poured “a glass of what looked like champagne”, according to the Daily Mail.

The catch? Donald Trump is a well-known teetotaler who has reportedly never touched alcohol in his life and who uses non-alcoholic beverages as a substitute for wine and champagne at other state banquets.

This time, however, it looked like the president might’ve been served actual alcohol as he “politely lifted the glass to his lips, but grimaced and did not take a sip”, the newspaper notes.

A number of social media users seemed to sympathise with the president, warning others not to mock him over this particular episode.

Of all the things to criticize Trump for, him abstaining from alcohol should be just about last on the list.

Smear a guy for not drinking. Pathetic.

Some were also quick to recall the story of Trump’s late brother struggling with a drinking problem and asking Donald to abstain from alcohol, thus prompting the latter do adopt his teetotal ways.

His brother Fred Trump jr. was an alcoholic who warned.@realDonaldTrump against ever drinking or smoking. It eventually led to his brother's death.

.@realDonaldTrump has kept that promise to never smoke or drink.

Man, you sure got him,.@MailOnline.

​And at least one person expressed hope that the UK won’t make a mistake of serving alcohol to Trump during his upcoming state visit to the UK.

Bad manners to offer a teetotaller alcohol. I hope we do better in the Uk.