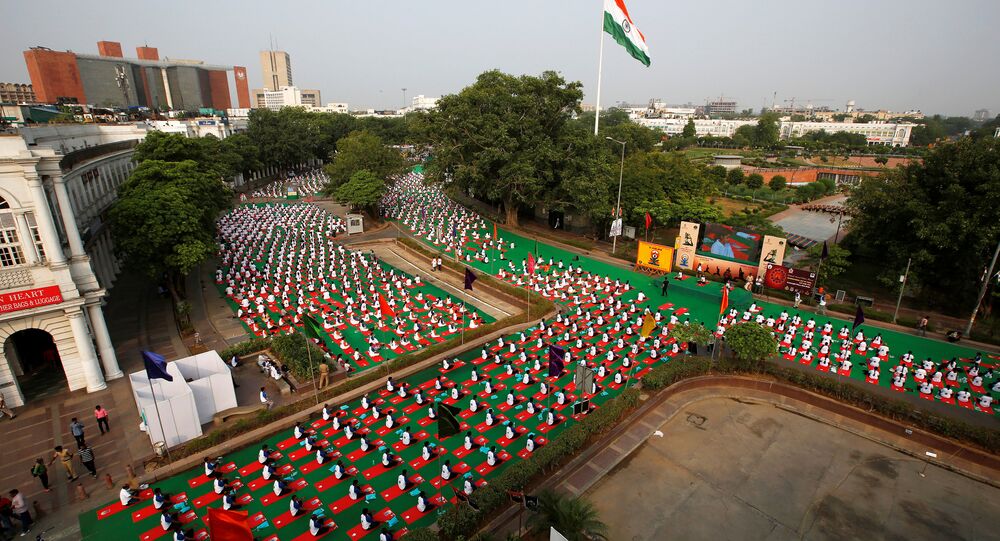 The yoga guru, who also runs a major chain of consumer goods called ‘Patanjali’, proposed the move to address unsustainable population growth in the country. India is known to follow a policy of universal suffrage in which all Indians above the age of 18 irrespective of their gender, religion, caste or creed are allowed to vote.

New Delhi (Sputnik): Indian yoga guru Baba Ramdev's calls to to bar the third child of any couple from voting in elections has triggered controversy and debate on the social media.

Ramdev said such a rule would encourage Indians to stick to a ‘two-child policy', aiding population control.

READ MORE: How Globalization and Populism Are Impacting the Modern World

Addressing reporters in Haridwar in Northern India on Sunday, the yoga guru raised concerns related to India's growing population of over 1.3 billion.

"India's population should not be more than 150 crores [1.5 Billion] in the next 50 years as we are not prepared or ready to bear more than that. This is only possible when the government makes a law that third child would not be allowed to vote, neither contest election nor he/she enjoys any type of privileges and facilities given by the government," he said.

© AFP 2020 / ROLEX DELA PENA
World Population Will Hit 9 Bln by 2040, India Will Overgrow China in 2026
The proposed policy, however, did not go down well with some netizens and politicians.

There is no law preventing people from saying downright unconstitutiona things, but why do Ramdev’s ideas receive undue attention?

That he can do a thing with his stomach or move about his legs shouldn’t mean @narendramodi lose his right to vote just because he’s the 3rd kid https://t.co/svvZMa4aZy

Other social media users opted to give Ramdev a piece of their mind. One user suggested he "stick to yoga", while another hilariously used a Game of Thrones reference to mock him.

Ze Man should stick to yoga. That’s his only #KRA. #ramdev https://t.co/eXHC1h8PR6

So now children should be made illegitimate by the state for no fault of theirs? #Ramdev should reflect on the consequences before making such suggestions

However, there were others who agreed that more should be done to tackle rapid population growth in India.

On population control, I support #BabaRamdev as it is indeed a serious issue https://t.co/BAiu1XZn6j

Population must decrease to save the planet. You won't be able to feed and take care of all.