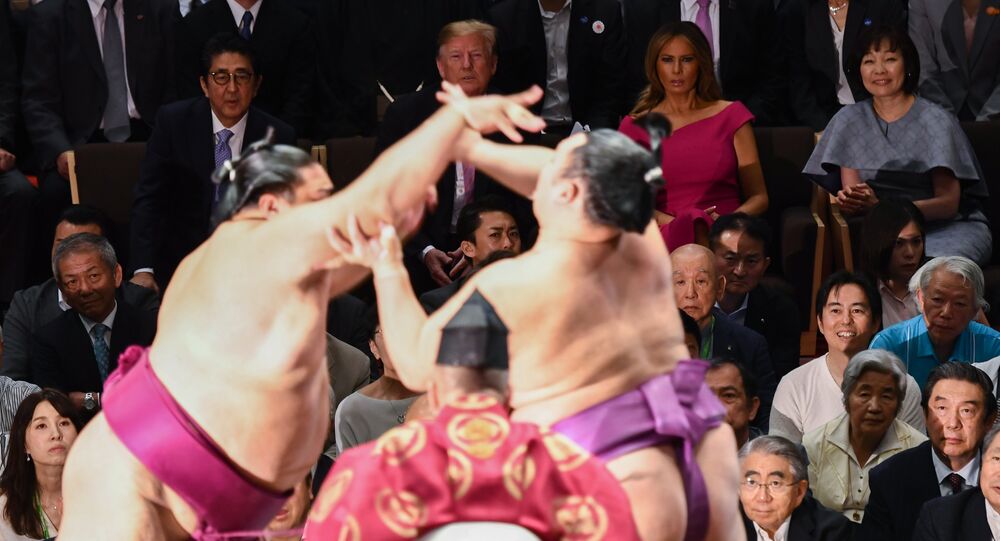 Donald and Melania Trump seemed to be absolutely enthralled by the sumo tournament in Tokyo, which they attended on Sunday as part of the US president's four-day visit to Japan.

Donald Trump, accompanied by his wife and Japan's first couple, became the first US leader to watch sumo in Japan, the homeland of the eye-catching combat sports.

He even stepped into the ring to award the winner with the first "President's Cup", a huge trophy topped with an eagle, the US national bird symbol.

His appearance at the Summer Grand Sumo Tournament in Tokyo grabbed international headlines, with US tabloids coining the term "sumo diplomacy" — a play on the so-called ping-pong diplomacy between the US and China, which saw the two conflicting states stage table tennis matches in the 1970s, thus paving the way for high-profile talks.

All kinds of diplomacy notwithstanding, commenters on social media seized on the opportunity to once again berate the divisive US president.

Some users made mean-spirited comments about photos of Melania Trump frowning during the sumo match.

"During Trump's visit to Japan, Melania has flashbacks of painful memories while observing sumo wrestlers' bodies," quipped a Twitterian.

"Melania 'enjoying' the Sumo wrestling…thinks her hubby may have a career possibility after impeachment," another user joked.

Must be what it looks like when 45 and SHS are fighting over the last piece of KFC on airfarce 1.

And a number of people were quick to suggest that her husband could have joined the action.

"Did he compete?" a user under the handle the Macabre Gamer inquired ironically.

Another commenter added: "He was asking if it's possible for him to wrestle too."

Does the winner wrestle Trump or would he have an unfair weight advantage?

Before attending the sumo match, Donald Trump and Shinzo Abe had a morning of golf — arguably Trump's game of choice — and bonded over double cheeseburgers, one the most American meals one can imagine.

On Monday, they are set to have bilateral talks that are likely to focus on trade, as Donald Trump has earlier complained about the growing trade deficit with Japan and barriers to US exports.

Trump's state visit will wrap up with a dinner with Japan's new Emperor Naruhito and a speech at an American naval base in Yokosuka.